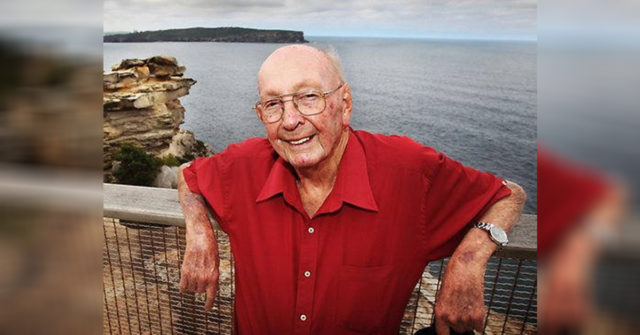 (Image Credit:Craig Greenhill/The Daily Telegraph)
Don Ritchie spent over 50 years living next to a cliff famous for suicides known as ‘The Gap’ in Australia. Every morning he would wake up and look out the window, searching for “anyone standing too close to the precipice.” If he did see someone who was contemplating jumping, he would walk over to them and start a conversation.


“Why don’t you come and have a cup of tea?” he would often say to them, and when they turned to see him, his smile was often their salvation. Regarded by many as the guardian angel of the gap, Ritchie has saved an estimated 160 lives, though Ritchie himself does not keep count. “I’m offering them an alternative, really.” Ritchie says. “I always act in a friendly manner, I smile.”

Not all are able to hear Ritchie’s voice, as an estimated one person a week commits suicide at the cliffs, but Ritchie keeps going despite this. He said he does his best with each person, and if he loses one, he accepts there was nothing more he could have done.

Often times just being shown a little bit of love was enough, “And that was all that was often needed to turn people around, and he would say not to underestimate the power of a kind word and a smile,” said his daughter Sue Ritchie Bereny. Ritchie would receive heartfelt letters and visits from those he had saved sometimes 10 or 20 years later.

“Ritchie continued to live at the house until his passing in 2012, and he had no issue about living near the cliffs despite the constant suicide attempts. He was awarded the Medal of the Order for all of his rescues, him and his wife were named Woollahra Council’s Citizens of the Year, and he was also given the Local Hero Award for Australia.

In a situation where most would turn a blind eye, Don has taken action,” wrote the National Australia Day Council. “With such simple actions, Don has saved an extraordinary number of lives. Don’s story touched the hearts of all Australians and challenged us to rethink what it means to be a good neighbor.” Don Ritchie’s beautiful way of reaching out and showing love to those who were in the lowest parts of their lives, is truly a moving example of compassion.

My Son, I closed my eyes for but a moment and suddenly a man...

Kind Bus Driver Let A Cold Homeless Man Stay On Her Bus For 6...

Sachiko Tominaga Decided To Move To Laos To Help The Poor, And Has Opened...

10 Simple Ways To Cope With And Relieve Stress