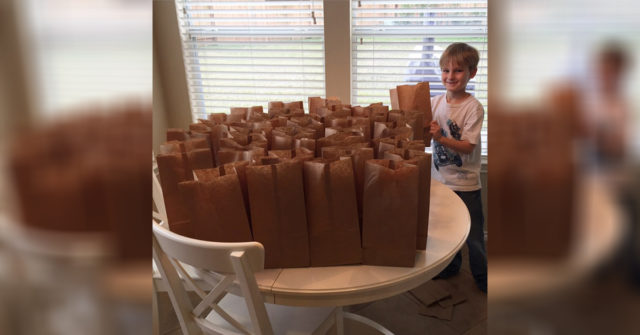 This boy had a beautiful Christmas request, and his dad Phineas1713 decided to share it.

“Saturday morning, my son walked into my room and said he wanted to use his money to help the homeless. I asked him what he had in mind, and he said he wanted to make them lunches. I have to be honest, I almost tried to talk him into just holding on to his money and having mom and dad pay for it, but the light in his eyes told me to just roll with it.”

The boy had spent an entire year saving up $120, and decided to use it to make lunches for the homeless in Houston Texas.

The family bought groceries and made dozens of sandwiches.

They loaded them into the car.

“He did most of the handing-out by himself, but this was the only picture we got of us actually giving the stuff out.”

The heart of a child is so beautiful, and so kind. Let’s learn from his example and share something beautiful with those in our community.

8 Signs You Have A Man Who Will Love You Forever

Kind Man Pushed Disabled Stranger UPHILL For A Mile To Get Her Home After...

9 Nanas Kept A Secret Group For 30 Years Which Sent Care Packages And...