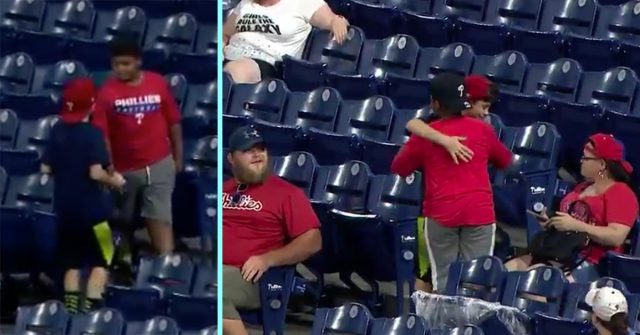 During a competitive baseball game between the Phillies and the Los Angeles Dodgers, one kind boy showed the world what winning is all about.

The game had been delayed for two hours due to heavy rain, and fans were feeling the frustrations of trying to stay dry while also waiting out the storm. During the top of the fifth inning, a foul ball was hit into the empty stands of right field, and fans raced to be the first to get it.

One child, Jaden, reached the ball first, and as he picked it up, a child he didn’t know, Franky, arrived at the ball just after him.

Without a second of hesitation, the kind Jaden handed the ball to Franky, a boy he didn’t know:

Franky, who received the ball, had a huge smile on his face:

“That was nice of him,” Phillies announcer Tom McCarthy said as cameras captured the event.

“That is very nice of that young man,” analyst John Kruk said. “I think we can all go home now.”

The boys continued to run back down the stands, and before they parted, they shared a beautiful hug:

Watch this 20 second clip of Jaden’s act of kindness at the Phillies / Dodgers game:

A few innings later, NBC Sports Philadelphia’s Gregg Murphy came down to the stands and interviewed the two boys, who had become friends and were sitting together watching the rest of the game. He told them that their act of kindness was going viral online receiving millions of views.

Gregg said that they saw Jaden’s nice gesture, and Jaden said that he had since gotten another ball for himself. Gregg gave him one more baseball as a gift and said if he wanted to, he could give it away as well. Jaden looked around and saw a boy he said looked sad, and so he went to give the baseball to him.

Meanwhile during the interview, Franky decided to start dancing with joy while he was on T.V.

“Did you guys know each other beforehand?” Gregg asked.

“Nuh uh,” Jaden said. “Five minutes later I asked him, ‘What’s your name?’ and we just kind of met each other.”

“That’s a great way to make friends here at the ballpark, I love it! Way to go guys,” Gregg replied.

Here is Gregg’s interview with Jaden and Franky:

“This kid is awesome, what a selfless thing to do.” ~Mike D.

“That mother and son should have free tickets the rest of the year!”
~Stephanie C.

“Bravo to both of these young men! One for his truly selfless act and the other for his genuine expression of gratitude. You two represent the best of our great city. ”
~I.H.T.

Jaden’s compassion brought the world to a stop for a moment during the Phillies game, as millions of hearts were touched by his selfless act of kindness. His kind choice to give a hopeful stranger the ball taught us all what winning is really all about: sharing with your neighbors.

Here Are 10 Simple Ways To Remove Negative Energy From Your Home, Raise Your...