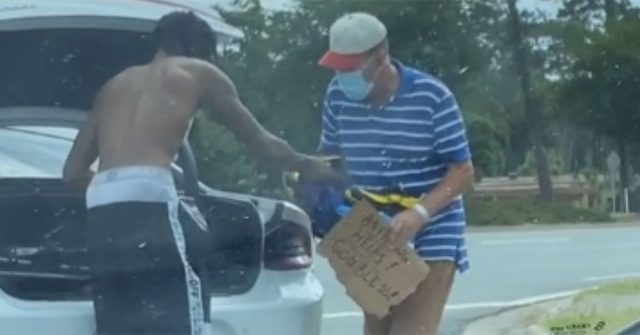 While driving in Tallahassee, Florida, a kind young man stopped his car to give a homeless man on the side of the road a pair of shoes and some extra clothes.

The kind young man, Jacabri Richardson, was driving down I-10 in Florida when he spotted a homeless man on the side of the road.

The homeless man was holding a sign which read:

Jacabri, who is a student at Florida A&M, stopped his car and opened his trunk, giving the homeless man a pair of his own shoes, his own shirt and some of his extra clothes.

While doing this, he had no idea that the driver behind him was recording his kind deed. A user by the handle AmburAndLex was in the car behind the young man, and being inspired by his kindness, recorded the heart-touching moment on their phone.


They later shared it online, and it has since received millions of views from grateful hearts around the globe.

A local news station later interviewed Jacabri, and he shared that he was in the process of moving and wanted to give some of his extra clothes to someone who needed it.

“As I was growing up, my mom always taught me there’s a lot of people that are in need,” Jacabri said. “Not Everyone’s blessed as I am. My Mom always had clothes and shoes on my back. I can definitely take that for granted.”

What Sitting Too Long Does to Your Body According To Science