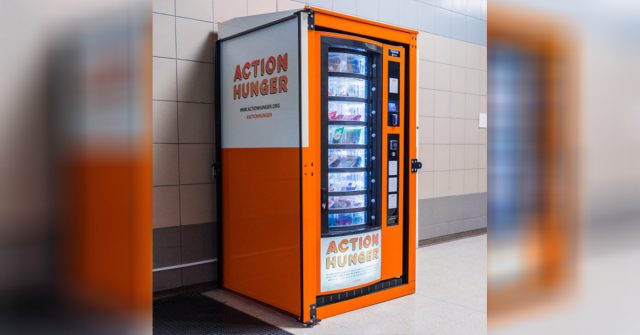 Action Hunger vending machines give sandwiches, fruit, energy bars, clean socks, toothbrushes and other daily necessities to the homeless who have been given a card by a local shelter.

Shopping centers in the U.K. are beginning to provide vending machines that offer free daily goods for the homeless. These vending machines do not accept cash, but locals who are struggling to survive and have recently stayed at a local shelter can pickup an Action Hunger card and use it free of charge at any vending machine.

“There is a critical need for access to food and clothing outside the capacity that shelters can offer,” Huzaifah Khaled the founder of Action Hunger said.

Action Hunger is a nonprofit organization that recognizes the needs of the homeless that exist outside of charity and shelter working hours. Many homeless shelters are often overbooked and only have staff during certain hours of the day.

“It requires the homeless to schedule their days around visits to the shelter, making it hard to hold a stable job or see family regularly,” Khaled said. “Our vending machines offer 24/7 access, so they can be used at a person’s convenience–and completely free of charge.”

Action Hunger has partnerships with many homeless nonprofits and charities who help in handing out the vending machine cards. With a card, a person can get three items each day, and to continue using it they must check-in each week at a partner organization. The idea is similar to the Free Pantry projects which have begun across the U.S., and while being only a temporary solution, they provide great relief and support to the most vulnerable members of our society.

Action Hunger reports that the streets are a dangerous place to live, and that homeless people are 17 times more likely to be a victim of violent crime than the general public. They also report that while the average U.K. citizen lives to 81 years old, the homeless have an average lifespan of only 47 years. The homeless are also 35 times more likely to commit suicide than the average person. After seeing all of these statistics put together, those with compassionate hearts have been moved to action in a great effort to help the homeless.

“The idea is that users don’t become dependent on the machines, and are working towards a long-term plan for getting off the streets,” Khaled says. “I want our low-cost vending machines to complement other existing services, as I believe continued engagement with local services is key to ending the cycle of homelessness, and linking the use of our cards to continued engagement with these services is a way I believe we can ensure that. It will ensure contact is sustained, and hopefully for long enough for their homelessness to be curbed altogether.”

Khaled was inspired to create the Action Hunger vending machines while he was completing his PhD at the University of Cambridge. He witnessed many of the homeless struggling to survive on his daily commute on the trains, and often times he befriended them. “I always stopped to talk, often with a coffee or meal in hand,” he said. “I developed an acute understanding of their needs, and learned that even access to basic necessities like food and water was sporadic and oftentimes cumbersome… I realized that there had to be a more effective way of at least ensuring the bare necessities were always available.”

Khaled began writing to numerous vending machine manufacturers and N&W Global decided to donate Action Hunger’s first machine. After this, a businessman donated another 100 machines, and volunteers help to restock the machines by using food rescued and donated from local restaurants. UberEats is also stepping up in partnership, and will soon be able to allow requests to be made through an app to refill the machines, while UberEats makes the deliveries.

Action Hunger is expanding to the U.S. in February with its first vending machine going up in New York, and they have plans to expand to San Francisco, Seattle and also Los Angeles.

“The immediate benefit of our vending machines is that they satiate hunger and provide nourishment to the most vulnerable members of society. They permit access to food and clothing free of charge at any hour — without requiring anyone to be left without aid outside the operating hours of the various charities and shelters that are available. Our machines are also very inexpensive and economical to run, as we don’t have the attendant costs of running a physical premises, and the automated nature of the machines supplant the need for many staff — a bank of volunteers manage the day-to-day operation. Furthermore, at a time when government cuts in funding for local councils has decimated lots of the resources available, and had debilitating effects on those services that do remain, our machines serve as a novel solution.” Action Hunger writes on their website.

“If 40,000 people were prevented from becoming homeless for one year in England it would save the public purse £370 million.”

If inspired, you can support Action Hunger here.

“If you can’t feed a hundred people, then just feed one.”
~Mother Teresa

“If you judge people, you have no time to love them.”
~Mother Teresa

“Not all of us can do great things, but we can do small things with great love.”
~Mother Teresa

Were You Born Between Signs – On Cusp? This Is What It Means For...

During this crisis, I want my friends and loved ones to know I am...