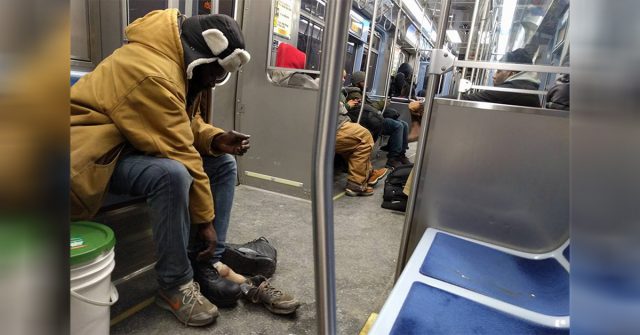 A passenger witnessed a beautiful act of love while riding the train: a kind young man gave a suffering homeless person his own brand new boots that he himself was wearing.

The homeless man was believed to be riding the train to stay warm during the cold, and as he warmed his feet from potential frostbite, passengers could see he was bleeding through his socks.

Jessica Bell was riding the train and sitting nearby the homeless man.

“So, I’m headed home on the CTA Redline and there’s a homeless man sitting across from me. He’s older, weathered, minding his own business. His feet are so swollen he’s wearing the tattered gym shoes he has with the back folded down; like slip-ons. I don’t know how many pairs of socks he’s wearing in an attempt to keep his feet warm but there is blood seeping through,” Jessica shared.

As Jessica was noticing the sad condition of the cold homeless man, a young man nearby approached him.

“There’s another man on the other side of the doors; younger, carrying a satchel and a suitcase, also minding his own business. He’s wearing a pair of big black snow boots. They look new; they look expensive; they’re built for a Chicago winter. Quietly, in a blink and you’ll miss it fashion, the younger man takes off the boots he’s wearing and passes them to the old man. He opens his suitcase and gives him a pair of socks as well.”

“The young man puts on a spare pair of shoes from the suitcase. These shoes are nice too, but not as nice as the boots. They would have fit the old man just as well, but they were not what this old man needed.”

“He tells the old man to try and clean his feet and to make sure he changes into the new socks as soon as he can and then the young man gets off at 87th.”

“Those of us who are close enough to see and hear the exchange are floored.”

“The shoes off his feet.”

“I love that in a time and place where hate and apathy are rampant, quiet compassion appears without warning.
I pray that we all are compelled to do similar.
I pray that we all allow empathy to invoke action.
I pray that we never forget that we have always had the power to be a blessing.
I’m inspired to continue to try to ‘be the change’ and I pray you are too.”

The media later discovered that the man’s name is Maurice Anderson, an elevator technician, and when interviewed, he said;

“I didn’t even realize I was being recorded or photographed,” Maurice admitted.

The shoes were only three weeks old and had been barely worn.

Jessica, who witnessed this beautiful moment, shared her thoughts with us at Understanding Compassion;

“I think it’s important for people to remember that we all have the power to meet someone’s needs, and that all we have to do is act. A pair of shoes or a box of tampons won’t end poverty or solve homelessness, but when we offer our resources in pursuit of economic justice, it allows an impoverished person to divert the resources they have to something else that they need.” Jessica said. “Chicago is an amazing city, and its people are amazing.”

If you have extra clothes or goods that are unused and you think could benefit someone in need, consider giving them to a charity in your area this week.

“Compassion brings us to a stop, and for a moment, we rise above ourselves.”

Kind Young Woman Won A Car And Gave It To Her Coworker Who Was...