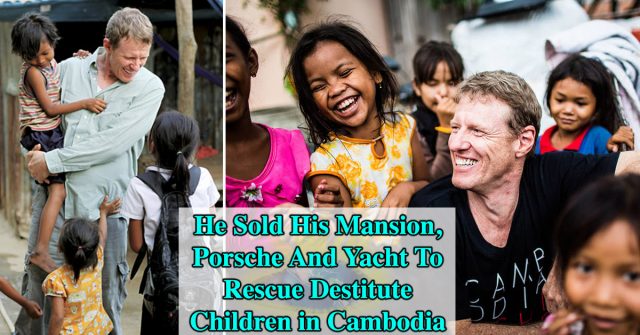 It’s not the norm to see 4, 5 and 6-year-olds digging through heaps of garbage alone in order to find enough recyclables to exchange for food to eat. But that was what Scott Neeson saw when he first visited the Steung Meanchey garbage dump in Cambodia, and it changed his life forever.

Scott was originally a wealthy Hollywood VP and marketed some of the biggest movies of all time such as Braveheart, Titanic, Independence Day and X-Men. While he used to spend his weekends partying with Mel Gibson, Harrison Ford, Tom Cruise and hundreds of other famous stars, he now chooses to spend them caring for, educating and giving healthcare to over 1,900 children who at one point were desperately in need.

Many people are surprised that someone who had such a luxurious Hollywood life would let it all go in order to follow his compassionate heart.

“People often ask if I miss anything about the Hollywood days. The answer is, ‘Sure, yes.’ I would rather spend a Sunday afternoon on my boat with good friends than knee-deep and alone on a garbage dump,” Scott said.

“I had a Porsche and I flew in private jets with movie stars. It was great. But the real question isn’t about missing things. That’s a tangible, almost simple math. It’s like Disneyland. It’s a great experience but it’s not real and I don’t want to live there.”

“When I’m on my death bed, will that feeling of warmth, that knowledge that I truly lived, come from having owned a Porsche? Having flown first-class? Having marketed great movies? Or will I treasure the difference CCF has made to the lives of thousands of children? My greatest triumph is seeing the metamorphosis of destitute and neglected children into wonderfully caring, and cared-for, kids. It’s an endless source of surprise that they can adjust so quickly.”

Scott, who shares that his experience has been one of love, blood, sweat and tears, recalls the moment he decided to change his life in order to help the abandoned children he encountered:

“I was due to move over from 20th Century Fox to Sony in 2003. I took a five-week break and I travelled to Phnom Penh, where I saw the municipal rubbish dump and met the kids who lived and worked there. I’d never seen anything like it – 11 hectares of garbage and flies.”

“The moment I stepped there it was the single most impactful moment in my life. I was standing there facing into the abyss.”

“It’s like hell. There were 3000 families living there and hundreds of orphans, scavenging for things to sell, wrapped in rags upon rags to keep the flames at bay. They had no shoes. Many were child prostitutes. Some were there because their parents couldn’t afford them or didn’t want them. I had to do something.”

“I went back to LA and started at Sony but my heart wasn’t in it. That year, I travelled to Cambodia for one week every month, setting up my charity at the dump,” Scott explains.

“I was 45 and was a bit worried I was having a mid-life crisis so I was trying to keep my two lives running side by side.”

“But in 2004, I was at the dump with three children all under six who were suffering from typhoid and had just days to live. My phone went and it was a well-known actor refusing to get on a private jet because he didn’t like the thread-count in the upholstery on the seats.”

“That was the final straw. It became clear how vacuous and superficial life in Hollywood was. I went back to the States, sold up and moved to Cambodia.”

“The charity often pays off debts or provides a house in return for reassurance the kids will be allowed to attend school, where they get a daily meal, healthcare and an education. We also offer 10 kilos of rice and free healthcare to parents whose kids have good attendance at school. It works well – we now have 22 girls who have graduated from university and have full-time jobs.”

“Every evening, I go on walkabouts round the slum villages surrounding Steung Meanchey checking in on families I know are in need and rescuing young children who have been abandoned or are in desperate need of CCF services.”

“We now have four boarding schools, three satellite schools and a community centre, plus daycare, nursery and maternal care programs, a free medical clinic and an emergency shelter for victims of domestic violence.”

Scott, whose beautiful charity relies heavily on fundraising, child sponsorship and the support of generous donors as well as his Hollywood contacts including Heather Graham, Hugh Jackman and Meg Ryan, added: “In the beginning, the kids used to follow me around pleading with me to let them study. Now the parents do it.”

As the children grow, they are able to attend school, and college. To date, CCF has 47 college graduates, with the very first girl Scott found on the garbage dump, Srey Nich, graduating this past December.

“I now have 2000 kids who call me Papa Scott or dad. They look to me to keep them safe. Sometimes I can’t sleep at night worrying about the responsibility I have to them. They are incredible.”

Scott’s beautifully compassionate heart led him to sell all of his possessions, to leave his luxurious life and to focus all of his energy and passion into helping children who are the poorest of the poor. Thousands of children who had the most difficult starting point of life imaginable, are now cared for, fed, well-educated, and truly loved.

Support his cause by visiting cambodianchildrensfund.org, and for the cost of a few cups of coffee each month, you too can save the lives of destitute children who desperately need our love.

One day you will realize that the most important thing in life was not how rich or famous we became, but was how much we loved those who needed love the most ❤️

In the following video, watch Scott and CCF’s incredible story:

How many of you have friends from 20 years ago?

During this crisis, I want my friends and loved ones to know I am...