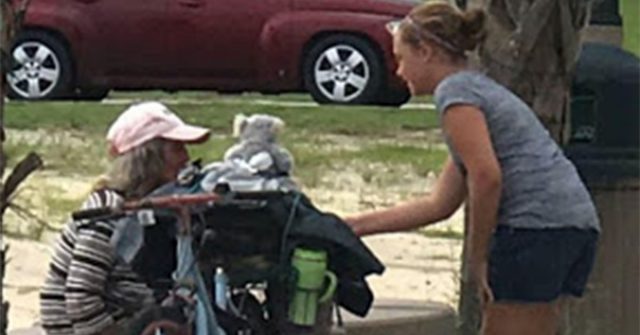 While walking at a boardwalk with her family, a kind 12-year-old used the only five dollars she had and gave it to a homeless woman she saw sitting on a bench.

“This is my daughter. She is 12. Today she gave me a proud parent moment,” Greg Peterson shared in a post online.

Greg Peterson and his family were on vacation, and while walking down a boardwalk, his 12-year-old daughter wanted to buy something with the five dollars she had in her pocket.

“We are on vacation and she has had this $5 bill burning a whole in her pocket since we got down here. She has asked multiple times to buy something and I told her not to waste her money on it.”

Her dad didn’t want her to waste her money buying something random, and after many requests, he got into the habit of telling her no when she asked, even when she asked if she could give it to a homeless person as he did not realize that she was being serious.

“Well today, we are at the boardwalk and she comes into the coffee shop where I’m in ordering me and the Wifey’s drinks. She looks at me and asks “dad can I give my $5 to a homeless person?” I chuckled and said no. Not realizing I was about to feel like an idiot. I didn’t realize that there was a homeless woman sitting out across from the coffee shop.”

“The lady wasn’t begging for money, but rather just sitting there alone and sad looking. We walk away and my daughter asked why I chuckled when she asked me about giving the lady her money. I told her I was sorry and didn’t realize there was a homeless woman outside.”

“We walk around the boardwalk and on the way back by the woman was still sitting there. The entire time walking the boards mind you, not once did my daughter ask to spend her money. I looked at my daughter and told her yes, you can give her your $5. She said thank you for telling her not to use it previously and hopefully this woman can get food or something to help out even though it’s only $5. She has such a big heart.”

Before they left, the homeless woman shared a smile, a nice wave and a special moment with Greg’s daughter.

“We passed the woman once more on our way out, she gave my daughter a little wave of thanks and my daughter returned it. I told her she did a good thing, [and she] knew to be humble that she was able to help someone who needed it. Kids have a way of proving humanity still has a chance.”

City Lovingly Builds Tiny Village For Homeless Veterans: 50 Tiny Houses Where They Can Live For Free

When someone helps you and they’re struggling too, that’s not help, that’s Love.

Kind Young Man Mowed 50 Yards For Free For The Elderly, Disabled, Veterans And...

Kind 7-Yr-Old Makes And Delivers Hundreds Of Care Packages To The Elderly While They...