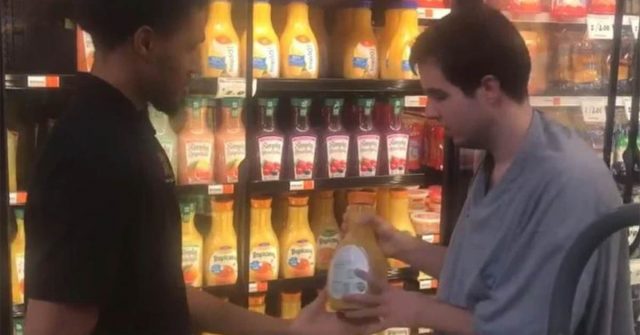 When a kind grocery store employee noticed a young man with autism watching him stock shelves, he asked the young man if he wanted to join him, and the two happily stocked the store’s shelves for more than 30 minutes together.

Sid Edwards and his 17-year-old son Jack visited their local Rouses Market in Baton Rogue, Louisiana, to pickup some groceries for their family. While shopping, Jack, who is on the autism spectrum, noticed a young store employee stocking drinks into a cooler, and he was mesmerized.

Jack’s father noticed his son watching the store employee and at first thought he just wanted some orange juice, so he grabbed him a bottle, but after getting the juice, Jack stood still and continued to watch the employee work.

After a few minutes, the employee, 20-year-old Jordan Taylor, walked over to Jack and asked him if he wanted to help.

“Something in the back of my mind was just like, ‘ask if he wants to help you,'” Jordan said.

Jack said yes, and to his father’s surprise, they both began stocking shelves together. Jordan showed him where each drink went, and how to push the drinks back in the cooler to fit a new one. Jack was having so much fun working for the first time in his life, that the two spent more than 30 minutes together.

Even though including Jack was making Jordan’s job a little slower, he was patient, gentle and kind with Jack, giving him encouragement and smiles. Jack’s father was deeply moved by Jordan’s kindness towards his son.

“It was a big deal,” Sid said of the special moment.

“To me, when you go to a grocery store with an autistic kid, especially when they’re young, people don’t understand, they’re not very accepting. Somehow this young man reached my son… he went into Jack’s world.”

Sid wanted to remember the moment, so he took a short video of his son helping fill the coolers.

He later showed the video to his family, and his daughter, Jack’s sister Delaney Alwosaibi, was also deeply touched and proud of her brother. She shared the video online with the following message:

“He could have ignored him. He could have made an excuse and said he couldn’t allow him to help. Instead, he let him have his moment and in turn gave my family a moment we will never forget,” Delaney shared.

Thousands of hearts online appreciated Jordan’s kindness and thoughtfulness for Jack, and a news organization came to the store to meet him.

“Just always… help others when you can,” Jordan said.

“If you would have seen his dad’s face, it said it all. He was just so happy… [Jack] was happy putting the juices up and I was just happy I could make someone else happy… make their day.”

Jack’s sister Delaney came to the store to thank Jordan, and she learned that he wanted to someday go to college and to become a teacher, so she setup a GoFundMe for Jordan with the following note:

“Jordan Taylor, an employee of a local supermarket, invited my little brother, Jack Ryan, to help him stock groceries. Jack Ryan, or “Ziggy” as I call him, is diagnosed with autism and often becomes fixated on things. Jack Ryan was watching Jordan stock the coolers when Jordan asked Jack if he’d like to help. The smile on Jack’s face said all of the words that he couldn’t. Jack and Jordan stocked the coolers as a team, Jordan encouraging Jack Ryan as he finished each task. Jordan told me he loves math and would like to possibly be an educator someday. All I know is, whatever he decides to do he will excel! Thank you to Jordan for what you did for our Ziggy, we will never forget!”

To everyone’s surprise, kind hearts from around the world donated to the fundraiser for Jordan, and they were able to raise more than $135,000. The funds will be used to pay for Jordan to go to college and to purchase him his first car. Jack was also offered a job at the grocery store and became an employee.

Jordan, a very gentle soul, couldn’t believe how much those around the world had just helped him.

“I never pictured all this would happen… I was just… being me, that’s it,” he said as tears filled his eyes. “I just wanted to help somebody else out.”

Watch This Heartwarming Video Of Jack and Jordan Stocking Shelves In The Coolers Together:

Kind Teacher Wears The Same Hairstyle As Student Who Didn’t Believe She Liked Her...