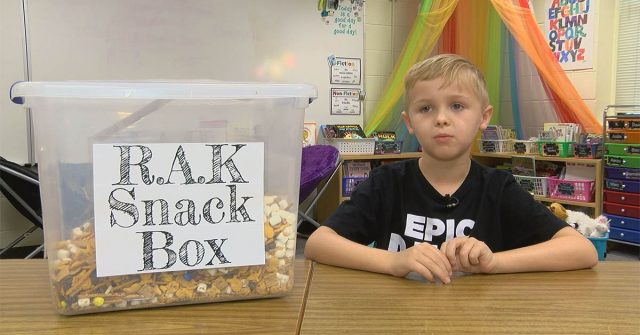 When a kind 7-year-old noticed that some of his friends and classmates didn’t have a snack to eat during recess, he began bringing enough snacks to share with everyone.

7-year-old Stryker Blake first noticed that while he was eating his snacks at his elementary school in Georgia, that many of his classmates didn’t have snacks to eat. Wanting to help them, each day he began bringing extra snacks to share.

“I started looking at people who didn’t have snacks, so I brought some snacks,” Stryker said.

After a few weeks, other students and his 2nd grade teacher began to understand what Stryker was doing, and they themselves began bringing extra snacks for others as well.

They began making snack bags for students, and each snack bag contained various treats including cookies and money for ice cream. The bags also contained a note with a kindness challenge which asked them to do various small acts of kindness after they received the bag.

“You have to read that, the kindness, and you have to like, do the things. So, if it says like, pick up three pieces of litter, you pick it up and do the random act of kindness,” explained Stryker.

After a short amount of time, 3rd, 4th and 5th graders began to participate, and before long, the entire school was engaged in doing daily acts of kindness for each other.

“We have children in all grades, all classes bringing snacks in for others, purchasing ice cream for others. And so because the children are doing it and it’s their ideas, it’s been amazing,” his assistant principal, Jaimie, said. “We hope that this story gets out to others and other schools take it on, other children take it on. And then maybe, we will be world changers just by this small, little gesture of making sure everybody has a snack.”

Child Couldn’t Afford New Shoes For The School Year, So This Kind Worker Used His Own Money To Buy Them