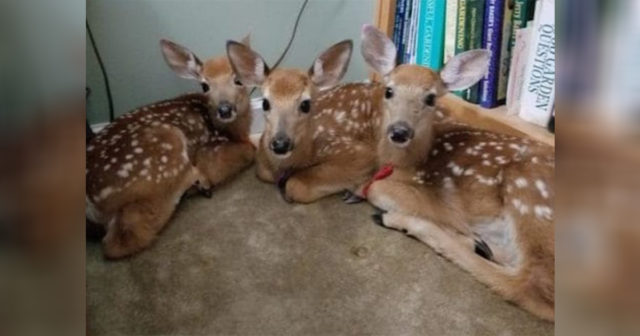 If you live in or around any wooded area, chances are that you have had your fair share of encounters with deer.

They live in various areas of the country. In some regions, people try to keep them away from their vegetable gardens. However, the sight of a baby deer will melt just about any heart and make any gardener forget all about the flowers they ate last night.


After all, if you’ve seen Bambi, you probably have a soft spot for these beautiful woodland creatures.

The reality is, a spotted fawn is one of the cutest baby animals around. But what’s sweeter than a baby deer? Three!

That’s exactly what one woman discovered in her living room, after leaving her back door open while closing windows to prepare for an oncoming storm.

Imgur user  Amscolie shared her story after accidentally leaving her back door open as a storm began to set in outside.

She went outside to check on the deer she typically cares for, but couldn’t find them anywhere.

Turns out, they may have been one or two steps ahead of her.

Animals tend to have better weather detecting abilities than most humans. We don’t know exactly how they do it, but they may sense changes in air pressure, or hear sounds at a frequency beyond what human ears are capable of.

Often times dogs, horses, and birds tend to get uneasy before a thunderstorm or another major weather event; they know something is happening.

Amscolie’s deer are no exception. Three fawns snuck into her house without her noticing, thanks to the open back door.

Amscolie explains,
“I raise orphaned wildlife. Recently, the back door was open as a storm was coming. The deer were nowhere to be found. Went inside, was heading to the front door, only to see them next to an end table in the living room. Told them they could sleep in the house for the night because it was going to be nasty.”

Instead of worrying about the storm, they got to snuggle in and have a cozy night away from the bad weather.

According to Amsoclie, deer show their gratitude just like dogs, with lots of exuberant kisses to show their appreciation!

Amscolie is right when she writes, “But how could you ever say no to a face like this?”

The answer is? You simply can’t. These little Bambis are too cute to resist!

Be kind to every kind of life, not just humankind.

Kind Cashier Used His Own Card To Pay For Homeless Man’s Meal; Next Customer...

A Child Asked A Kind Old Man At The Store If He Was Santa;...

8 Deeply Beautiful Truths We Learned From The Giving Tree