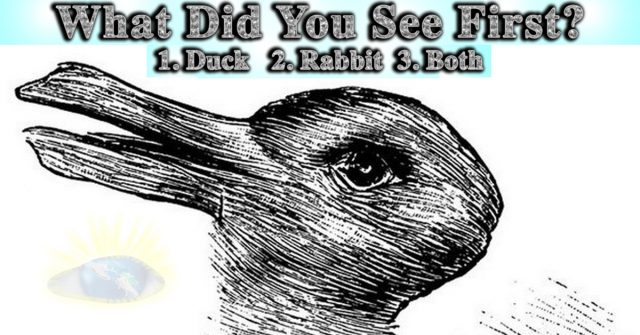 The rabbit duck illusion dates back to as early as October 1892, where its first use was reported in a German magazine. It was also later found in an introductory psychology book which was published in 1911. A version of it was also shown on a BBC TV show called Right Hand, Left Hand back in August of 1953, creating the opportunity for almost 4,000 viewers to analyze it.

In this fun test, look at the picture and see which animal appears first, then read on to see if you agree with what it says about you.

Look at the picture below and see which animals appear to you: 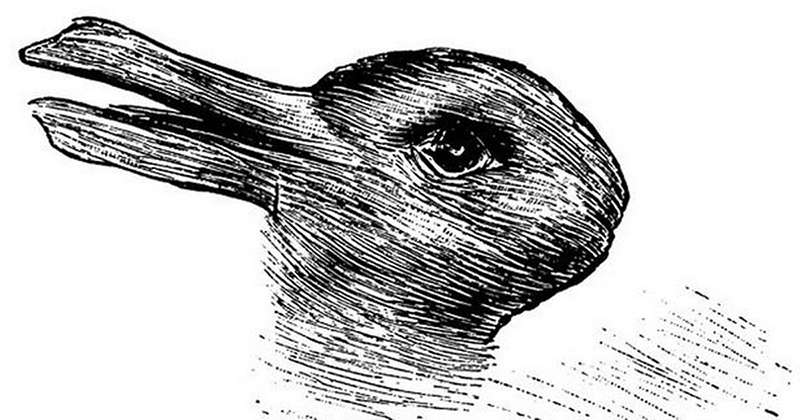 If you first saw the duck, your eyes are working well as this is what the majority of people first identify when looking at the picture. Ducks are a symbol of calm and peace, and also have deep spiritual associations.

It’s likely that your main interests and passions are not related to material goods and acquiring more things, but rather in deep heartfelt treasures, such as helping others, appreciating and protecting nature, and pursuing higher meaning in life. Your efforts to find and create a state of inner calm will likely be rewarded well, because this is your true nature.

If you first saw the rabbit, then you first saw what the majority of the population does not. Most people see the duck first and have difficulty seeing the rabbit, so your eye for detail and creative ability is quite high.

Rabbits are often associated with bringing good luck, as for centuries a rabbit’s foot was considered a good luck charm to carry around. Consider listening more to your heart and your intuition, as you have deep potential to achieve and accomplish in life what many others cannot. New and exciting opportunities are likely working their way to you, so keep an open-mind and when they arrive, if they resonate within your heart, go for it!

The meaning of the psychological side of the rabbit duck illusion says that people who are able to see both animals easily are more creative in general. Most people can see the duck, but have difficulty seeing the rabbit — so if you can see both, congratulations! You likely are gifted with a greater sense of creativity.

The results confirmed the theory: Participants who could switch between the animals the fastest were also able to find an average of three more uses for the everyday objects, compared to the participants who had trouble switching between the rabbit and the duck.

Since you are wonderfully creative, keep a compassionate heart focus and listen to the ideas that come from your heart. They may be ideas of how to fix something in your life, your community, or the world, and they are worth putting a great value on. It’s the wonderful ideas from compassionate and creative geniuses like you that can make the world a better place, so remember to share your ideas and allow them to be created.

Have a beautiful rest of your day.

A post shared by Understanding Compassion (@understanding_compassion) on Apr 4, 2018 at 12:01am PDT