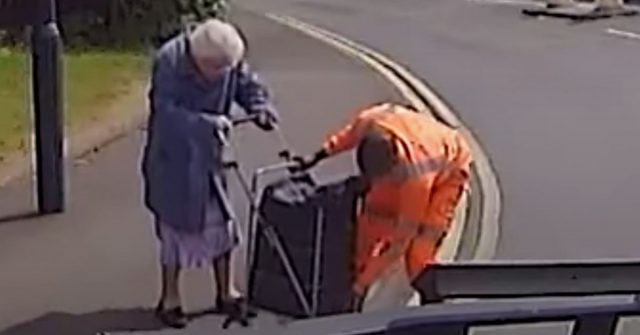 When a kind truck driver saw an elderly woman struggling to cross a busy intersection with her grocery walker, he set his truck into park to keep her safe, and then walked outside and helped her cross the street.

Malino Wilson was driving his cement truck back to the depot in Oldbury, England, but as he made a right turn, he noticed an elderly woman with a grocery walker slowly trying to walk across the street.

Malino stopped his truck to let her pass, but as she tried, her cart’s wheels kept getting stuck on the curb.

The elderly woman eventually gave up and waved for the cement truck to just go on by.

But instead of driving past, Malino put his truck into park and walked outside and helped lift the woman’s walker over the curb.

“It is a dangerous place to cross and I could see the lady was struggling to push her shopping bag down the curb,” Malino later said in an interview. “[I thought] the rest of the traffic isn’t going to wait, so I’m going to get out and go help her.”

He patiently walked by her side as she slowly made her way to the other side of the street.

The elderly woman thanked Malino, and then he got back into his truck and drove away. The cars waiting behind the cement truck shared the beautiful moment online from their phones, and thousands of hearts online have appreciated Malino’s kindness.

“My parents brought me up to respect the elderly and vulnerable people, and I just knew it was the right thing to do,” Malino said.

“It don’t cost anything: having manners, being polite and stuff like that, it don’t cost a penny. It’s true.”