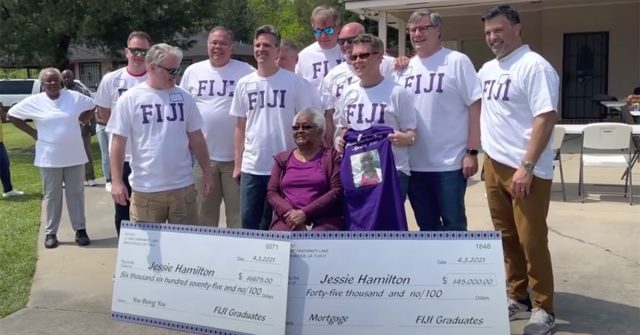 After learning that their former fraternity house cook was now 73-years-old and still working two jobs to get by, a group of kind fraternity brothers came together and paid off the mortgage on her house so she could retire.

Jessie Hamilton was a cook at the Phi Gamma Delta fraternity house, known as Fiji, on Louisiana State University’s campus from 1982 to 1996. A single mother with three children of her own, Jessie made breakfast, lunch and dinner each day for the young men who lived at the Fiji house. But Jessie did a lot more than just preparing delicious meals for her rambunctious college students. For many of the young men, Jessie was a second mother. She listened to their worries anytime they were struggling with something, and offered them the support and counsel which only a loving mother can give. She helped drive them to doctor’s appointments when needed, and would also drive them to the grocery store when they wanted to go.

“I enjoyed doing it. They loved my cooking,” Jessie said. “I was always there to talk things through with them. They’d come in the kitchen and sit on top of the counter and tell me their problems.”

One of the young frat brothers who Jessie had really been there for in the late 1980s, Andrew Fusaiotti, is now 52-years-old and felt that Jessie had treated him like a son.

“She was truly like a mother to us,” Andrew said. “She treated us like we were her own kids. She was always looking out for us.”


After Jessie left LSU after a decade and a half of being a Fiji chef, she found herself juggling multiple jobs in order to get by. She had worked hard for most of her life, usually working more than one job at a time, starting when she was just fourteen years old. In 2006 she took out a 30-year mortgage and purchased a home she hoped to one day retire in.

As the years passed, Jessie kept in touch with many of the fraternity brothers, one of them being Andrew. At the start of the pandemic, Andrew gave her a call just to check in and to make sure that she was okay. During their conversation, he learned that Jessie, who was now in her 70s, was still working several jobs, and that it didn’t seem that she would be able to retire anytime soon.

It troubled Andrew to hear that his second mom, who he dearly loved, was still working so hard to get by, and he knew that he needed to do something. Andrew spoke with Jessie’s family and learned a bit more about her situation, including that she was still paying off roughly $45,000 on her mortgage. This gave him a picture of the financial amount it would take for her to retire.

Andrew began calling his past fraternity brothers and let them know about Jessie’s situation; asking for donations that would be used to help Ms. Hamilton retire. 91 alumnae from Fiji house donated between $400 to $1000 each for Jessie, and after numerous calls, Andrew had raised $51,765 for this sweet woman’s retirement.

“She is the type of person that inspires me, people that don’t have a lot but give a lot,” Andrew said. “She’s the most giving person you’ve ever met.”

Several of the Fiji brothers decided to come to Jessie’s 74th birthday party, bringing with them a few lovely surprise gifts.

“You told me a year ago that you’re still working two jobs, cleaning and cooking at age 73,” Andrew emotionally said to Jessie at her birthday party. “We had to do something about that, and that’s why we’re here.”

Andrew and his Fiji brothers setup a small game where Jessie’s children chose three separate gifts for her. The first gift was t-shirts for everyone with her picture on it, and a fully catered lunch with boiled crawfish, chicken and sausage jumbalaya, oysters and more worth $2000.

Her second gift caused Jessie to cover her mouth in disbelief; a check for more than $6,000 just for her.

“You’re a very special lady in all of our lives and you always have been,” one of the Fiji brothers told her.

Before giving her the third gift, another Fiji brother who had stayed in touch shared a few words with Jessie’s birthday party.

“I remember Jessie told me a story a long time ago about this house and what it meant to her. Part of the problem with the house is that it comes with bills and all kinds of stuff. Let’s see what we got.”

The third gift for Jessie was another check, this time for $45,000, enough to fully pay off the rest of her mortgage.

Jessie was instantly moved to tears and speechless, managing to only say over and over, ‘thank ya’ll, thank ya’ll,’ and ‘Oh my God.’ For a kind woman who had worked so hard from 14-years-old to now 74-years-old, this was truly a blessing.

“To be able to honor Jessie and give her something that would change her life, I don’t think I could ever fully describe how it made us all feel,” Johnny, a Fiji brother who had been one of those young men sitting on the Fiji kitchen countertop asking Jessie for advice, said.

Watch this beautiful video of Jessie’s Fiji family presenting her with a check to pay her mortgage at her birthday party:

Studies Reveal The Only Proven Way To Solve Racism: Teaching About Race In Schools