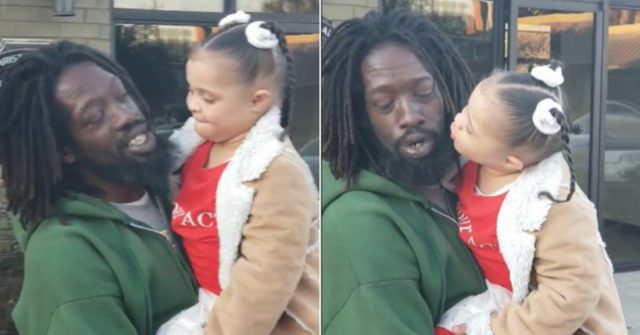 When a kind homeless man picked up little Nevaeh Foster who is usually non-verbal, the two began singing a beautiful song together.

Nevaeh was with her Mom, Kimberly, and the two of them were volunteering at a local church’s charity event for feeding the poor when the duo of love met.

Nevaeh is 8-years-old, has Down syndrome and is maybe the cutest girl you’ll see today. The homeless man offered some juice to her, and she took a real liking to him. He then casually asked her if she wanted to sing a song together with him.

Her mother Kimberly Phillips says her daughter just has a way of communicating pure joy, even with total strangers. She doesn’t need to use words.

“I know Nevaeh in her wholeness, and I know if she could talk what she would say,” Nevaeh’s Mom, Kimberly said.

“When you’re around her, you don’t need words. She completely inspires you beyond meaning.”

Yet to everyone’s surprise, she began to sing a little bit too! Nevaeh’s mom recorded their sweet little duet.

The two started singing Smokie Norful’s “I Understand,” while Nevaeh was in the kind man’s arms.

“Sometimes I feel like giving up. It seems like my best just ain’t good enough. Lord, if you hear me, I’m calling you. Do you see, do you care all about what I’m going through?” he sang.

Kim was moved as her child not only made a new friend, but also became verbal with him and participated in the song. “Her actions speak louder than words,” Kimberly said. “Love made her do it.”

Kim shared this beautiful experience online and it has been viewed millions of times.

In a follow-up post on Facebook, Kim said she and her daughter went looking for the homeless man and when they found him (His name is Teiyons), she gave him the exciting news of his popularity. “I can’t tell you how full our hearts are!!!! His smile said it all:)!!! And each time he passed me he said “a million views???” He has been in shock:)!” Kim explained.

Nevaeh came to live with Kimberly when she was just nine days old. Her biological mother granted her sole custody, and Kimberly has ensured that Nevaeh receives the best medical care and physical therapy available. Kimberly says that raising this beautiful and special girl has been a blessing, and that she believes she can do anything. In return for her care, she has given back just as much.

“She’s been a big influence in our family,” Kimberly said.

“I found my relationship with God through her. She’s taught me forgiveness and love.”

Wherever little Nevaeh goes, she reaches out to people around her and makes them smile and laugh with joy.

Even though Teiyons had nothing in the world in terms of money or belongings, he offered Nevaeh the juice he’d been given, which brought tears to Kimberly’s eyes.

“He has nothing, be still gave,” said Kimberly.

Watch this beautiful duet in the video below:

A post shared by Understanding Compassion (@understanding_compassion) on Feb 16, 2019 at 3:04am PST