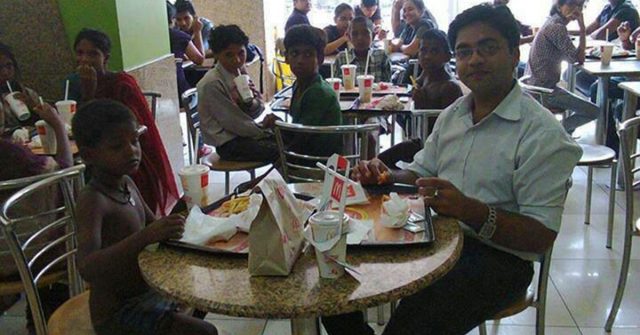 One kind young man decided that the best way to celebrate the first paycheck of his new job was by taking 15 poverty-stricken children out for happy meals.

The young man’s mother had previously encouraged him to donate some of his paycheck to a local temple, but he decided that the best use of his money would be to directly help some of the children in his community who were living in poverty. He explained in a post on kindnessblog.com that while he had some challenges getting the restaurant to allow poor children in, that in the end, it all was worth it:

“After completing my post graduation and certifying it with a job (for my relatives) my mother asked me to donate part of my 1st salary [to a] temple nearby where I was staying (Indian Tradition).
Well for me there is only one God. Its definition to me is some supreme power responsible for sustaining everything on this beautiful planet, and that power is everywhere around you. Hence, I never believed in visiting temples and for that matter spending a single penny on them (with no disrespect to anyone’s religious sentiments). I thought of many things [to do], but this was the only feasible option that came to my mind. I gathered all the poor kids (around 14-15) around a famous mall in Hasratganj, Lucknow, India, and took them to McDonalds.”

While trying to enter the mall that McDonalds was located in with fifteen children, two security guards tried to stop them from going inside.

“As we were entering the mall, the security guards tried to stop us.
Guard 1 (in a loud voice): Hey! You ill-mannered-boy (to one of the poor kids), where do you think you are going??!!

Me: ‘How dare you speak to him like that, they are with me!!’

Guard 1 : (now looking at Guard 2 (his senior) with a request for help in his eyes)
Guard 2 : ‘Sir, these type of people are not allowed in the mall.’

Guard 2 :(with an unclear answer): ‘Sir, we are told by our superiors not to let them in.’
Me : ‘It’s ok; they are my responsibility. I will make sure that they don’t disturb the environment in the mall.’

After making it into the mall with the children, he brought them to McDonalds, but found that this location only accepted cash and could not process his card. He ran outside to find an ATM, then rushed back in to meet the children.

“'[At McDonalds] I took out my Wallet and offered them my debit card.’

Hunt for an ATM

‘Now I had to search for an ATM outside of the mall, and [to do] that I had to leave the kids alone in McDonalds. I asked the kids to [try and] not misbehave, and I told them I was coming back in 5 minutes. I went outside the mall [and] found one ATM which was not functioning. I asked people around [and] found one more ATM after searching for 5 minutes. I took the cash and ran back to the mall. In total, it took approximately 15 minutes for me to return to the mall from [the time] when I left it.’”

After returning to McDonalds, the kind man found that the staff had made the children leave the restaurant and they were waiting outside.

“’As I was entering the mall, I saw that the employees of McDonalds had pushed the kids outside. I ran towards the front entrance, and in a loud voice, said, ‘These kids are with me!!!!!!’

McDonalds Person 2: ‘Sir, they are not allowed in here.’

Me: ‘Show me where that is written in your company’s policy.’

McDonalds Person 3: ‘Sir, we cannot do that.’

Me: ‘Sorry, then we cannot leave.’

McDonalds Person 2 and 3, after looking at each other, decided to let us all sit.’”

After several struggles, the kind young man and the 15 children were able to sit down for a few hours and enjoy their happy meals together. They eventually left after having had an enjoyable experience which the children were truly grateful for.

“I ordered happy meals for all of us. [We] had some great times. Spent 2-3 hours laughing and talking to each other. [The] kids spilled 3-4 Pepsi filled glasses, which to my surprise, were refilled for free by the McDonalds staff. All in all, we all enjoyed [our time] and we left the mall with some great memories.”

The young man shared the reasons he wanted to help the children, which included helping them to feel accepted and also to shatter social ideas of poor children not being worthy.

“There were many reasons for me to do this:
I never wanted to waste my hard earned money in temple donation.
I thought that this way I would be able to make these kids feel accepted.
I wanted to break this social convention of rich and poor within me and others around me.
I always thought of doing it in my college days.
I wanted my 1st salary celebration to be very very special.”

Now he has a wonderful relationship with the children, whom he sees regularly, and they call him ‘big brother.’

“Now all these kids know me very well, and whenever I pass by that area, we all spend time together playing, sharing jokes, [and] playing pranks on one another. They call me by various names; “Bhaiya (Hindi for big brother)”, “Uncle”, “cha-cha (Hindi for Uncle)”, which makes me feel much more accepted in their life than they [were] in mine.

If you have read all of this, thanks for bearing with me.” 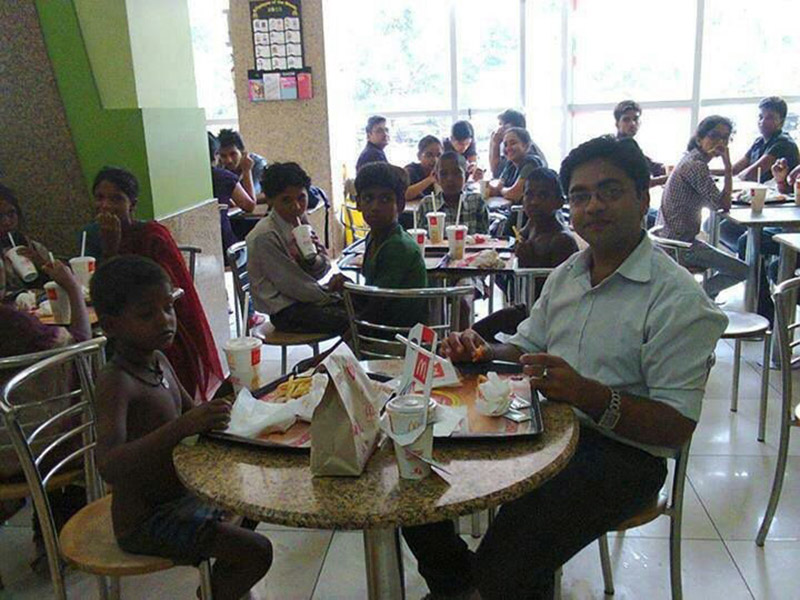 Many hearts were deeply touched at how far the kind young man went to make sure that the poor children could enjoy a warm meal with him.

“Tears rolled down my eyes looking at that poor kid [in the photo]. 1000 hugs for that kind man who made this possible, an amazing soul. No amount of prayers and temple visits make sense if one cannot feel the IT in his heart, God will be a million times happy watching the smile on these kid’s faces,” one reader commented.

“His persistence reminds me of a story I once read about Mother Teresa who spent her life helping many poor children in India: she was with another nun and they desperately needed food to feed numerous starving homeless people in the city. They walked into a small local grocer and put several hundred dollars worth of food in their cart, all the while the other nun was telling Mother Teresa that they couldn’t afford to buy this food because they had no money. ‘God will provide’ is all she said to the other nun. As they got to the register where the small grocer’s owner was working, he asked them to pay for the food, and Mother Teresa told him that it was food for the poor. The owner told her that he understood but that he is running a business and could not give them the food for free. Mother Teresa insisted that it was food for the poor and that they needed it and she would not budge, and neither would the store owner. After several loud back-and-forths between them, the man in line behind the nuns told them to please stop and that he would pay for all of the food. ‘See, I told you God would provide!’ Mother Teresa exclaimed to the other nun. The kind young man in this story reminds me of her strong-willed compassionate spirit for the poor,” another wrote.

The kindness shown by the young man will surely not be forgotten by the children. They not only received warm meals, but they were shown acceptance, love, and that they too are worthy human beings. They now have a ‘big brother’ who is here to look out for them.

A post shared by Understanding Compassion (@understanding_compassion) on Jan 7, 2020 at 11:30pm PST