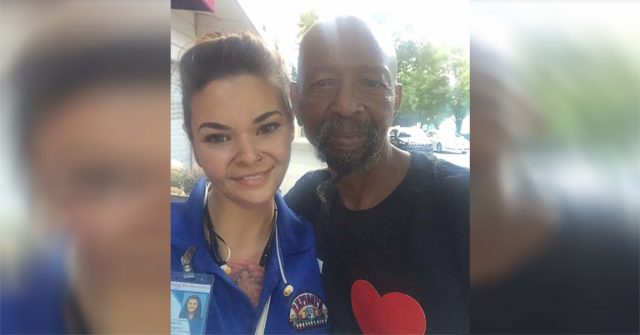 Many of our lovable homeless veterans feel isolated, ignored and despised by society. Many of them became homeless due to developing PTSD from highly frightening, painful and stressful experiences they faced while serving. Alone and forgotten in the world, they do the best they can to carry on.

While Kimberly Schintzius was outside playing ‘Pokemon Go’ on her phone, homeless veteran Daniel Wise thought she must be lost, so he asked her if she needed help getting anywhere. She explained she was just playing Pokemon Go, and the two of them had a friendly chat, and Kimberly even ended up buying him a meal. Daniel was deeply grateful for her kindness, and Kimberly was moved to share her experience online.

“While out catching Pokemon in Atlanta I was approached by a frail looking older man on a worn out bicycle, I know I must have appeared lost looking at my phone screen,” wrote Kimberly. “He asked if I needed help getting anywhere.”

She explained to Daniel a bit about Pokemon Go and even showed him a wild Pidgey, one of the game’s characters.

“He smiled and laughed and chatted with me about how he was wondering what all these young people walking around with their phones, doing funny things were doing.”

They continued to talk and after a bit of conversation she discovered his name was Daniel Wise, and that he is a Vietnam veteran.

“He then thanked me for being so kind and walking and talking with him instead of pretending he doesn’t exist like he had shared with me is what most people do whenever he tries to have conversations with people,” Kimberly wrote.

Kimberly said she was on her way to get lunch at a nearby deli, and she noticed a bit of sadness come across Daniel’s face.

“I don’t want you to think I’m trying to beg for money or anything like that like I know a lot of people ask for that and go buy alcohol or cigarettes but I don’t smoke, I’d really just like something to eat ma’am,” Daniel said.

Without asking any questions, Kimberly went and bought her meal, then gave her lunch to Daniel.

“Since I was just going to get myself some pasta salad I went ahead and ordered a whole meal that came with pasta salad as a side and I just kept the side for myself and handed him the rest of food I had ordered for him,” wrote Kimberly.

Her actions caused Daniel to break down in tears, and he was deeply grateful for her kindness. The two of them shared a hug, and Daniel told her how she had restored his faith in humanity.

“It warmed my heart to help him get a meal in his belly tonight and lift his spirits with a simple conversation while walking down the street,” wrote Kimberly.

Her post was shared numerous times online, and Kimberly wanted to find Daniel again to see if she could help more.

“I am going to try my best to get him in touch with the veterans assistance programs of Atlanta that have contacted me recently with information on how to help him,” Kimberly said.

Kimberly’s compassionate heart showed love and understanding to Daniel, who has been living a very difficult life for quite some time. If you encounter a homeless person on the street while going out for lunch, consider purchasing an extra meal and sharing it with them. Your act of kindness may keep their heart full for the entire year.

See Also: Homeless Veteran Breaks Down In Tears After Kind Stranger Agrees To Buy Him Lunch Every Day

This Share-A-Meal Food Truck Gives Out 250 Free Hot Burritos To The Homeless Each...