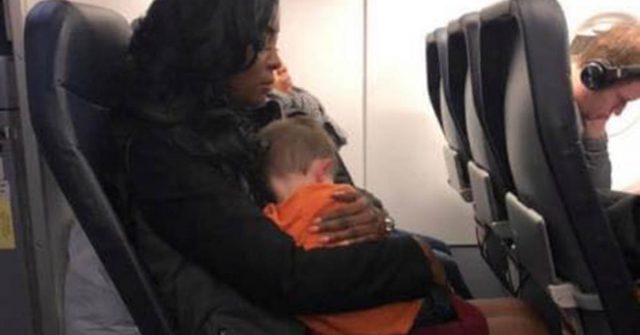 When Becca Kinsey’s two children were both exhausted and upset at the airport, three separate kind strangers helped make their day a lot easier.

Becca had just visited Disney World with her two sons, 2-year-old Wyatt and 5-year-old James, and after several days of joyful adventure, the little ones were exhausted. While trying to keep her toddlers calm, she happened to misplace her license, and then was sent to the wrong side of the airport. With only a little time left before their flight departed, Becca rushed with her sons towards her gate and ran into a line at security.

“So I thought it was a good idea to fly by myself with a 2 yr old and a 5 year old ? ,” Becca shared. “We were standing in line in security, on the verge of tears because Wyatt was screaming and James was exhausted. Out of the blue, one mom stops the line for security and says “here, jump in front of me! I know how it is!”

This kind woman allowed Becca and her sons to go ahead of her, saving them much needed time. Then to her surprise, another kind mom stepped out of line and offered some help as well.

“Wyatt fell asleep and I was trying to carry everyone’s carry-on when another mom jumps out of her place in line and says, “Hand me everything, I’ve got it.” When I said thank you to both of them, they said, “Don’t you worry, we’re going to make sure you get on that flight.” The second woman takes evvvverything and helps me get it through security and, on top of all that, she grabs all of it and walks us to the gate to make sure we get on the flight.”

“I would not have made that flight without those two women,” Becca said.

These two women had greatly helped her make it to her flight on time, and went above and beyond to lend a helping hand. The woman who walked her to her gate had a different flight in a different area, but she continued to stay with Becca and her sons until she made sure they were okay.

They were able to board, then as their flight began to take off, her 2-year-old woke up and began crying.

“To top it all off, Wyatt starts to scream at take off before he finally falls back to sleep… I was embarrassed through this whole ordeal. I think when you’re traveling with kids, people see you and think, ‘Oh god, they are on my flight.’ And when my kid started crying, I was so worried.”

A third kind woman came up to Becca during the flight and offered her a break by holding her young one in her arms for the rest of the flight.

“After about 45 min, this angel ?? comes to the back and says, “you look like you need a break” and holds Wyatt for the rest of the flight AND walks him all the way to baggage claim, hands him to Blake [husband waiting at arrivals], hugs me and says, ‘Merry Christmas!!'”

Becca was deeply grateful for the kindness shown to her by these three separate women and her post was shared more than 130,000 times. She left a note saying that she wants to help pay it forward, and that anyone inspired by the kindness of these three women can help by making a small donation to the charity Kidd’s Kids, which provides 5-day Disney trips to children with serious illnesses.

Becca believes we can all help make someone’s day a little brighter.

“You don’t need to do something big and grand to make a difference, sometimes you can just hold the door open,” she says.

See Also: Kind Stranger Gave His First-Class Seat To An 88-Yr-Old Woman Who Had Never Flown First Before