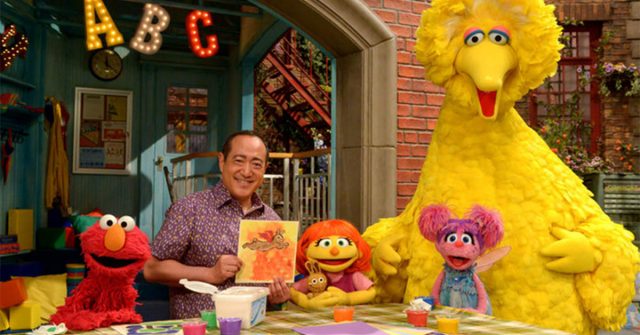 Big Bird, Elmo and Grover recently welcomed a new member to their Sesame Street family; Julia, a muppet with autism.

Sesame Street created Julia in an effort to help children and their parents both understand what autism looks like and how to support children with autism. Awareness and advocacy groups praised Sesame Street for their wonderful decision which is helping millions of children and adults living with autism be treated with more compassion.

“We think it’s a terrific next step for Sesame Street,” said Lisa Goring, chief program and marketing officer at Autism Speaks, a US advocacy organization.

Roughly 1 in 59 children are diagnosed with autism, and more than 3.5 million people live with an autism spectrum disorder (ASD) in the United States.

The National Institute of Mental Health explains that: “Autism spectrum disorder (ASD) is a developmental disorder that affects communication and behavior. Although autism can be diagnosed at any age, it is said to be a “developmental disorder” because symptoms generally appear in the first two years of life.” There is a wide variation in the type and severity of symptoms people experience, therefore they refer to autism as a “spectrum” disorder.

People with autism tend to have difficulty with communication and interactions with others, exhibit restricted interests and repetitive behaviors, and have symptoms that hurt the person’s ability to function properly in school, work, and other areas of life. 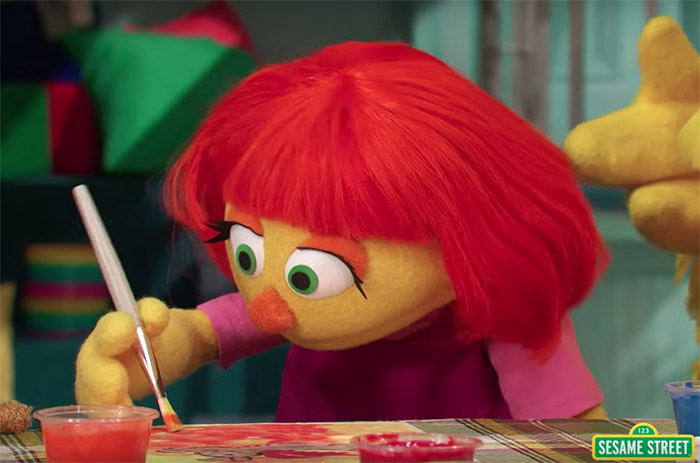 Julia showcases many of these tendencies, allowing the other characters to understand and become friends with her. When Julia first met Big Bird, she ignored him.

Sesame Street’s host Alan explained that because Julia has autism, “Sometimes it takes Julia a while to answer. It helps to ask again.”

While playing a game of tag together, Julia tends to flap her hands and jumps often, and rather than feeling scared or teasing her for it, the characters make it part of their game and they show loving acceptance. 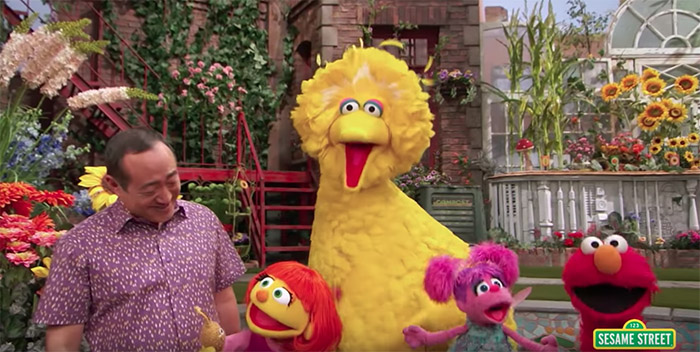 “It doesn’t matter how they play, they’re just a bunch of friends having fun!” Alan joyfully explains to Big Bird.

Julia’s puppeteer, Stacey Gordon, is well-versed in the ways of autism as her son registers on the autism spectrum. She emphasizes how important it is for children with ASD to see themselves as accepted by society, and for their friends to also see it.

“My son was the only hand-flapper in his class, and to have Julia flap her hands, and it was written into the script, ‘Julia flaps her hands,’ and to have nobody say that it was bad, that she had to stop, I’m getting emotional just thinking about it because it was such a big deal that for me to have Sesame Street treat it with such acceptance,” Stacey explained.

“Had my son’s friends been exposed to his behaviors through something that they had seen on TV before they experienced them in the classroom, they might not have been frightened.”

Together with 250 autism organizations, psychologists and experts, Sesame Street developed Julia. Her purple dress is loose, there are no distracting bows, buttons or ribbons, and her eyes can change depending on the scene; from wide open, to half closed, to totally closed if she feels upset or overwhelmed. Julia’s official debut took place on the news program 60 Minutes.

“Her hair had to be made so that her bangs weren’t in her eyes and that her hair didn’t fall into her mouth. And she couldn’t have any adornments in her hair—no barrettes, no ribbons,” explained puppet designer Rollie Krewson.

Sesame Street writer Christine Ferraro hopes that Julia will be accepted, loved and be seen as just another wonderful member of the show.

“I would love her to be not ‘Julia, the kid on Sesame Street who has autism,’” she said. “I would like her to be just Julia.”

Sesame Street has not only been teaching children their ABC’s, but they’ve also been helping children understand larger issues such as bullying, poverty, different cultures and the importance of kindness.

Stacey shared that there are so many grateful parents who send her messages of gratitude and appreciation.

“I get letters, emails, Facebook and Instagram messages that are just humbling. The letters and messages are different ways that Julia has changed people’s lives; both my friends and so many people that I don’t know,” she said.

Letting Go Of Worry For Good: 10 Steps To Relax A Worried Mind According...