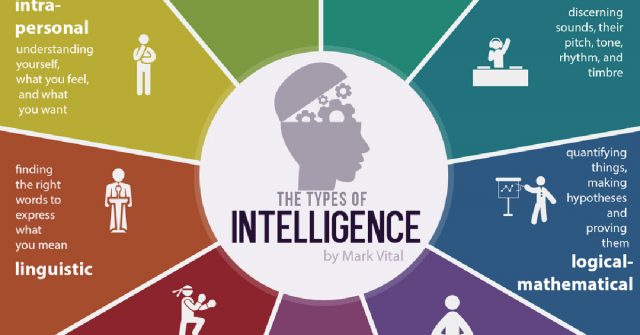 In 1983, Dr. Howard Gardner developed the Theory of Multiple Intelligences. He suggests that using IQ as a single basis of intelligence is too restrictive because each person is gifted with their own unique qualities and talents. Some people have difficulty with Math but excel in Fine Arts. Some people are not competitive athletes, but they excel in analytics. There are a variety of levels of intelligence, and they are not limited to basic standardized testing.


Each person varies in different areas of intelligence, but everyone is a genius in their own area. As one of the most intelligent humans to have walked the Earth, Albert Einstein, said, “Everybody is a genius, but if you judge a fish by its ability to climb a tree, it will live its whole life believing that it is stupid.”

Everyone has specific areas of high intelligence which they can use to accomplish incredible things in life. The first step is identifying and finding out which area of intelligence best describes you. Discovering this helps us to understand our individual learning mechanisms and can help us to reach our goals in life.

Of the The 9 Types Of Multiple Intelligences, Which Type Of “Smart” Are You?

Being logically smart is an advantage when you’re in school. People who belong to this category of intelligence are good in “deductive reasoning”. You’re logically smart if you have notable skills in calculating and solving problems, classification, experimentation, and have a good eye for detail. Playing mind games such as sudoku, chess, and engaging in mathematical sequences and patterns help develop your logical reasoning skills.

If you are good with using your words and grammar within the realm of communication, then you might be a verbal linguistic genius. Reading, writing, listening, and speaking are some of your best skills. You also have a knack of learning other languages easily. Along with being logically smart, being word smart is considered an advantage in school. Reading books, writing essays, playing word games, and participating in speaking contests or debates are some activities that improve and support your skills as a verbal linguist. Lawyers, public speakers and writers belong in this category.

J.K. Rowling, who is widely known for her Harry Potter book series has this type of intelligence. Another known verbal linguistic genius is Martin Luther King Jr, one of the greatest activists and civil rights leaders of our time.

People who are visually smart pursue careers in designing, architecture, fashion, and computer technology. When you have creative talent, you’re considered visually smart. You have skills in drawing, designing, and you can usually create in form what you’re able to visualize in your mind. In school, you associate what you learn with pictures and visual aids.

The renowned painter, Salvador Dali, had the visual spatial intelligence. iPhone designer Steve Jobs belongs in this field too.

As you may have already guessed, this intelligence involves a lot of physical movement. Actors and dancers like Michael Jackson have the skills to manipulate their body to the rhythm, which complimented his incredible musical ability. You are considered body smart when you are athletic and have a well-coordinated body. You associate what you learn through body movements. You’d rather be active than sit all day.

Aside from being a dancer and an actor, people who have this kind of intelligence pursue careers that involve a lot of physical movement. Athletes, gym instructors, and even construction workers. Arnold Schwarzeneggar is a Body Smart genius, as he won the Mr. Olympia for bodybuilding title a staggering 7 times, and later became a world famous actor and inspiration for those in the physical fitness community.

Some people study and enjoy the simple things in life while listening to music. For them, it helps retain the information they read in books, and also helps them enjoy life. If you are musically inclined, as in you integrate music into everything you do, then you are considered sound smart. You use music to understand, and have even thought about or pursued writing, performing and singing songs.

Composers such as Mozart had this kind of intelligence. Modern artists who write and compose their own songs such as Alicia Keys and Sam Smith also belong in this category.

If you have a general charisma and good people skills, then you might possess an interpersonal intelligence. You like talking to people, listening to their stories, engaging in social events, and taking place in activities that value teamwork. You are great at leading people and relating to them. Aside from being a fantastic talker, you also know how to listen and to reflect back the right words to people.

If you’re people smart, a career as a teacher, counselor, business consultant, social worker, and politician would suit you well. Some famous Interpersonal geniuses are Dr. Phil, Mother Teresa, and Oprah Winfrey.

A post shared by Understanding Compassion (@understanding_compassion) on Mar 14, 2018 at 10:42pm PDT

While some people are skilled at socializing, there are also people who work better and achieve more when they are alone. They know themselves better than most and are often very independent. They don’t have to thrive in a group to achieve their goals. To cultivate their intrapersonal intelligence, they put themselves in other people’s shoes to understand their perspectives, and they also keep a daily journal and read self-help books.

There have been nature shows about dog and cat whisperers, crocodile hunters, and people who take care of domestic or wild animals for a living. They have the skills to calm and tame wild animals that other people find hard to accomplish. They have a natural connection to the Earth, love working outside, and spend as much time as possible outdoors.

If you always connect to nature related activities easily and often find your strength related to working with nature and/or animals, then you are nature smart. Your hobbies and interests always have something to do with nature: fishing, bird watching, or taking care of pets. Naturalists blend with the outdoors, and veterinarians, zookeepers, and conservationists are all nature smart. Some known naturalists are Steve Irwin, Sir David Attenborough, and Gregor Mendel.

Do you ask complex questions about your existence? Your purpose in this world? Who you really are? If you do, then you might be an existentialist – or have a high spiritual intelligence. You have the aura of someone who has found peace within himself. While scholars are hesitant to acknowledge this type of intelligence in order to keep church and the state separate, it is still a valid area of intelligence similar to the area of intuition.

A person who finds more meaning in the pursuit of self-understanding rather than acquiring material possessions is spirit smart. They often spend time in meditation and prayer. Monks, shamans, philosophers, clergymen, and psychics are considered existentialists. Some known existentialists are Buddha, Lao Tzu, and Joan of Arc.

Source:
The Theory Of Multiple Intelligences By Howard Gardner

Fun Test: The First Word You See Reveals A Lot About Your Personality

After Finding Out It Was Her 90th Birthday, This Kind Cashier Left His Register,...

Kind 5-Yr-Old Asks Friends And Family For Bedding To Donate To Children Without Beds...