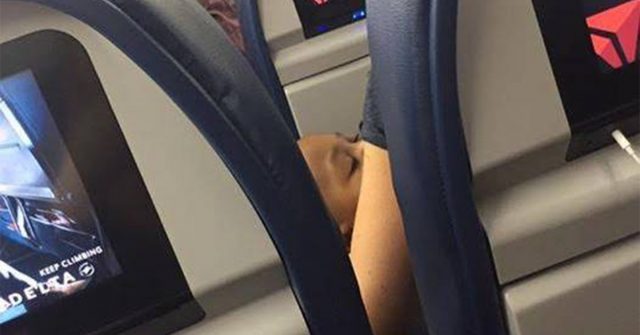 After overhearing a flight attendant tell a woman with twins that she could not stay on her flight while holding two babies at the same time, a kind woman offered and held one of her twins for more than three hours.

Mackenzie Murphy was taking a flight from New York to Boston when she overheard a mother with twins talking with multiple airline employees. The mother had brought her own car seat for the flight, planning to hold one of her babies and to let the other sleep in the car seat.

A gate worker noticed the car seat and let the mother know that only flight approved car seats for children were allowed to be used in flight. The worker ended up taking the car seat and checking it in as luggage.

“This restored my faith in humanity,” Mackenzie shared in a post on Love What Matters. “Yesterday, this woman on my flight had twin babies, probably under 6 months, not so sure of the age. It was a very packed flight so they started taking carry on luggage to store under the plane. A gate worker took this woman’s car seat, meaning she would now have to hold both babies since they weren’t old enough to sit up on their own in a seat.”

After boarding a few minutes later, a flight attendant came through the aisles and noticed that the struggling mother was now holding both of her twins in her arms. Per FAA travel rules related to oxygen masks, parents are only allowed to hold one child at a time, and as she was traveling alone, the flight attendant let her know that as she could not hold both children, that she would need to deboard the plane. A kind woman sitting in front of Mackenzie also overheard their conversation.

“When she sat down on the plane, a flight attendant immediately told her she couldn’t hold both babies, and would have to leave the flight,” Mackenzie said.

The kind woman, a mother also, volunteered to hold one of her twins for the entire flight, which ended up being more than three hours.

“A mother sitting in front of me, with permission from the other mother, volunteered to hold one of her babies for the entire flight. Keep in mind this was a flight that was supposed to be a quick 45 minutes. We ended up sitting on the tarmac for 2 1/2 hours! Without a complaint this woman fed the other woman’s baby and burped him. Her own daughter started crying. This mom, so calmly, went on to explain to her young daughter that, “Our job is to help other people. This mom is all by herself with no help, and really needs another mom to help.” She then went on to hold him, sing him songs, and then he slept the entire flight without even a cry.”

Mackenzie was deeply grateful for the woman’s compassion and kindness.

“My heart still feels fuzzy. When you see people needing help, do the right thing and help them.”

“In January I flew from Virginia Beach to LA with my 12 month old. She was fussy and wouldn’t sleep and just wanted to get down and run around. We were in the window seat and an older woman from Taiwan sat next to us. She didn’t speak a word of English but knew that I had almost had enough. She motioned to me asking if she could hold my daughter, and rocked her, played with her, sang to her. I will never ever forget her kindness! Although we couldn’t speak to one another, I felt so much love and gratitude toward her!! ❤❤” commented Rachel S.

“I love how she explained that to her own child! Hopefully her daughter then got involved, too! It’s nice to see people helping each other, and it’s even nicer to see people teach such valuable lessons to kids in such a kind way! ?” wrote Louisa H.

“Something similar happened to me nearly 25 years ago on a flight from FL to NJ with a 9-month old; it was so heartwarming that I never forgot it. My daughter wouldn’t stop crying no matter what I did; she was colicky anyway but inconsolable on this flight. I was becoming so distraught, but I can’t tell you the number of people who offered to help. Most importantly, someone said to me, “Don’t worry, honey. We’ve all been there. No one cares as much as you think they do,” commented Leigh E.

“I was on a flight with my two young daughters and a mom with one in a car seat & one in her arms got on board and was in the row behind us. As the flight got underway she realized one of them had dropped their binky on the way in. One binky two cranky babies. When the seatbelt light went out my daughter, who was maybe 9 at the time said, “I’m going to find that binky!” She got up and searched the isle and rows and found it! She came back to our row holding it up to the mom, who said, “Oh God Bless you!!” And started to cry in relief. The older couple behind the babies also helped by holding and watching them while she went and washed the binky. They both napped the rest of the way. I was really proud of my girl that day. She said, “I’m small so I could see the floor better to find it!!” shared Laura M.

Once You Learn These 5 Brutal Truths About Life, You’ll Be A Much Happier...

Talking To Yourself Might Mean You’re A Genius, Study Finds…