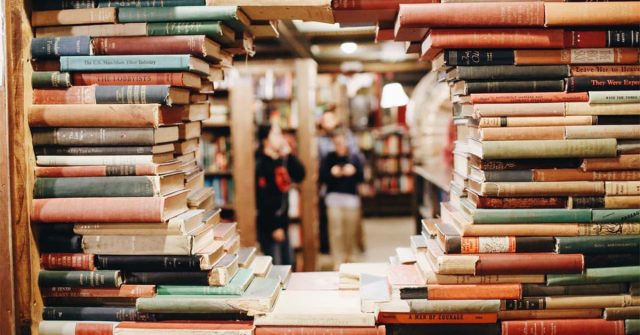 “Oh God I can’t even begin to tell this story and not cry.”

When a man who thought he might be gay was considering suicide, he called an LGBTQ bookstore for advice. What he found was support and compassion from a line of customers willing to help.

When writer Nicole Cliffe put out a tweet asking, “What is the kindest thing a stranger has done or said to you?”, a gay man from Chicago known online as TweetChizone left a reply of his experience that has gone viral with love.

“Oh God I can’t even tell this story and not cry,” he wrote. “I used to manage an LGBT bookstore, when bookstores were still a thing. One night, a caller says he thinks he might be gay and is considering self-harm. We were not a crisis centre! But as long as we’re talking, he’s safe, right?” 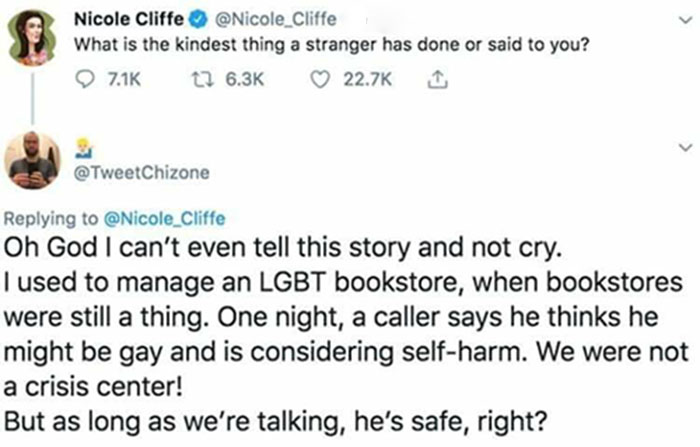 As the manager did his best to encourage the man on the phone while there were five customers in the store, one customer who heard their conversation came up and asked to also speak with the man.

He continued: “So I talk to this guy and I answer questions, and I try to be encouraging and I’m maybe sounding a little frantic and I’m definitely ignoring the 4-5 customers in the store, and this angel of a woman puts her hand on my shoulder and asks for the phone. ‘My turn,’ she says.”

“And SHE, this 50-something lesbian talks to this stranger on the phone.”

As this woman came to support the man considering self harm, the other customers in the store formed a line behind her as they too wanted to lovingly counsel and share their advice with the man on the phone.

“And a LINE FORMS BEHIND HER. Every customer in that store knows that call, knows that feeling, and every person takes a turn talking to that man.”

“That story comforts me so much to this day.”

Thousands of hearts were moved by the kindness of the strangers in the bookstore:

“Sounds like that person had no one else to talk to and you folks were able to make a difference,” one person commented.

“Community is such a wonderful thing. It makes all the difference to know you are not alone,” shared another.

“Like everyone else, I’m tearing up. This is so beautiful and heartbreaking,” wrote Zaralockshin.

“So many of us have found safety or provided care in LGBT bookstores. I hope they never go away. Thank you. And thank you for this story and gentle reminder of our connectedness,” replied another.

“Thank you. You most likely saved that man’s life, and I suspect that you also warmed the hearts of tens of thousands of strangers on the internet. I will remember your story and share it,” commented another grateful heart.

Opening up about one’s sexuality can be a very stressful and difficult experience for those who live in areas where there is a lack of acceptance and love. Young gay men and women are in the highest tier of at-risk youth for suicide, as many societies, and families, have not yet made it safe for them to be honest about their feelings.

Thanks to the kindness of the bookstore manager, and of the kind customers in the bookstore who bravely helped handle the call, his cry for help was heard and the young man’s life was likely saved.

Let there be love and unconditional acceptance for all of us.

Proud Parent Moment: Kind 12-Yr-Old Gave Her Only $5 To A Homeless Woman While On Vacation

Traits That Mentally Strong People Possess Without Being Aware of Them

This Is What Happens To The Body When You Eat Two Ripe Bananas Every...

Lady Gaga Took A Photo With A Homeless Man Who Said, “But I smell.”...