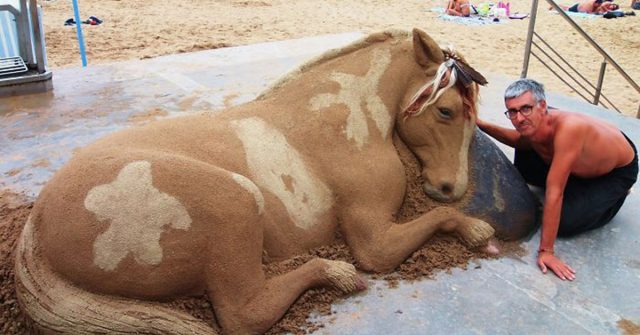 Andoni Bastarrika is an artist whose sand sculptures are so lifelike they are mesmerizing the world.

Andoni first began making sand sculptures in 2010, when he was at the beach with his two little girls. Instead of a sand castle, he made them a sand little mermaid, and his daughters were thrilled. Since then, he’s been honing his skills and working on new sand creations each year.

“I devoted myself to developing this gift and have spent the last 10 years doing just that,” Andoni said.

Andoni has a deep, artistic connection with nature, and he expresses it in his work.

“The sand fascinates me because no matter how you look at it, it will always teach you things if you are willing to learn,” Andoni wrote in a post online.

“In order to create a sculpture, an unthinkable number of sand particles participate, hugging each other tightly through humidity, so that someone could model their union. And once the artist steps back, its piece will remain at the mercy of nature, meaning that sooner or later the wind will dry them up and release each particle, slowly consuming all the individuality and authenticity.”

As Andoni packs sand tightly together to make something beautiful, his motivation comes from wanting to inspire humanity to create a beautiful world.

“To create a beautiful world, we should all embrace each other, just as tightly,” he says.

“There are a lot of reasons why I like to make animal sculptures as well, but one is the fact that animals are free spirits. Humans can reflect and learn from them.”

“Then, there’s the nudity they bring with themselves to this world at birth which they keep until their death. That nudity — at least to me — symbolizes freedom, the essential ingredient to being able to truly live. Humans ‘overdress’ to survive in a lot of ways. I have never made nor will I make an animal with a necklace or chains. I prefer to embrace their freedom, power, and wisdom through beauty rather than a form of suffering.”

To make his sand sculptures, he makes a large pile of moist sand and then begins shaping it. As he shapes the sand, the sand’s expression shows him what the sculpture will become. He then sometimes uses small materials to add color and texture, such as stone powder, coal powder, ashes, glass shards and clay powder.

It takes Andoni between six hours to two days to complete most of his sand sculptures.

“The time it takes to create one piece largely depends on its size,” he explained. “The elephant, for example, took me 2 days, while the horse and the bison took 12 hours each. The dogs, which were smaller, needed about 6 to 8 hours.”

Andoni’s sand sculptures are inspiring and nothing short of incredible.

Watch this video of a kind rescue worker saving an abandoned child who was labeled a witch in his village:

Thank You Dr. Fauci For Guiding Us And Helping Us Stay Safe…

Kind Manager Put Autistic Employee He Was Told “Could Only Sweep And Clean” As...