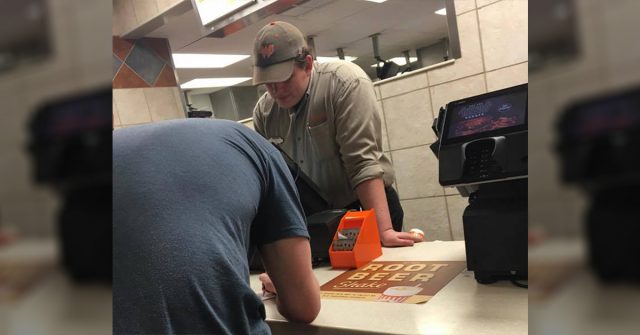 When a deaf cashier needed a line of hungry customers to write down their orders rather than speak them, one customer realized how genuinely kind the group of strangers around her was.

Kolbie Sanders went in for some late night food at a Whataburger in Denton, Texas, and while she was in line, she noticed the customers in front were having a conversation with the cashier. After understanding the kindness and gentleness that was taking place, she forgot about how hungry she was, and was instead grateful to take part in such a beautiful experience.

“My boyfriend and I were starving and the Whataburger down the street was calling our name so we went (we were going to go through drive-thru but that line was way too long so I decided to go inside instead),” Kolbie explained.

“I went inside and realized the inside line was a bit long too but I was too hungry to go anywhere else, so I waited. (the time is almost 1am because I work nights)”

“I realize the line isn’t really moving so I start paying attention as to why, because there were several people working in the back. That’s when I notice the cashier talking to a young couple in front of me. The girl ordered her food and the cashier just looked at her, smiled, and very faintly said ‘I am deaf, can you please talk slower.’ The girl lit up and said ‘oh, of course!’ and I heard her slow down her order for him. He still wasn’t able to catch on so he smiled again, and got a piece of paper and a pen for them to write down their order. They did so without hesitation. Without a sign of impatience, just pure joy and genuine kindness to be helping that young working man do his job.”

With many customers still in front of her, Kolbie watched to see if any of them would become impatient while waiting, but she only saw smiles, patience and love.

“I watched even after I placed my own order to see how everyone would react to him, to see if anyone would lose their temper with him taking extra long or get impatient because they were having to be hungry even longer, and I was surprised because not one person acted rude or impatient. Every customer complied with him and wrote down their orders without any complaints, just smiling back at him.”

“I’m sharing this for two reasons. One, because he is a deaf person and has a job. He is disabled and is able to work at a place that forces him to strengthen his disability by communicating with people daily. He is a special person that was given a fair chance at a job and does so willingly and with a smile on his face. THAT is utterly impressive and remarkable. Kudos to Whataburger alone for allowing this young man to work.”

“And second, with how twisted the world is becoming and after seeing so many people bully others on a daily basis, I can’t tell you how refreshing it was to see these small acts of kindness demonstrated from so many different people. Seeing people forget their pride or their problems or even their hunger is something you don’t see often. But at the end of the day, it’s about others, not ourselves.”

“This was eye-opening for me and I will never forget that moment.”

Rather than becoming impatient or frustrated by having to wait a few extra moments in line, a group of hungry strangers patiently and kindly waited for one another to pen their orders for a deaf cashier.

When later asked, the cashier said, “With all the people helping me with the orders, it made me feel happy.”

The next time you’re waiting in line at a restaurant or store, remember that we don’t always know the struggles that those around us are facing, and that a little patience and kindness can go a long way.

A post shared by Understanding Compassion (@understanding_compassion) on Dec 3, 2019 at 6:03pm PST

Humor Quiz: 10 Of The Funniest Wholesome Just For Laughs Videos

His Mom Said He Could Adopt A Puppy Or Cat; He Chose This 10-Yr-Old...