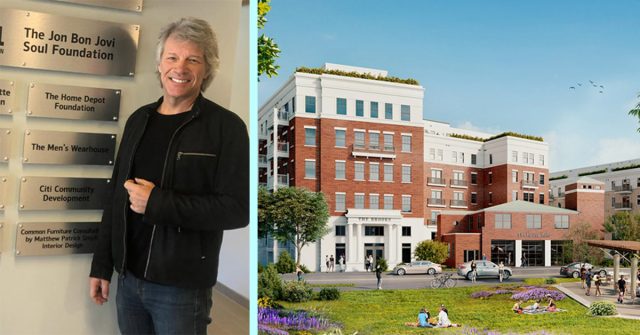 With more than 40,000 homeless veterans sleeping on the streets each night, one kind rockstar is doing all he can to make sure they are not left behind and forgotten.

When Bon Jovi was just 21-years-old and trying to make it in the music industry, he saw a homeless man sleeping uncomfortably on a grate outside of Philadelphia’s City Hall. He felt compassion for the homeless man, and as he stood outside of the City Hall, he felt that society was failing this poor soul.

“I thought, ‘This wasn’t what our forefathers were thinking,’ ” Bon Jovi said.

Bon Jovi now runs the JBJ Soul Foundation; a non-profit which seeks to break the cycles of poverty, hunger and homelessness through developing partnerships, creating programs and providing grant funding to community benefit organizations. They are committed to rebuilding pride in one’s self and one’s community by creating innovative and long-lasting solutions to hunger and homelessness. Bon Jovi’s Soul Foundation currently provides safe and affordable housing options for thousands of lovable people across America.

Bon Jovi’s parents were in the military, and he has taken the time to educate himself on the struggles veterans face after they return home; namely Post Traumatic Stress Disorder (PTSD).

“Oftentimes… [veterans are] left to deal with PTSD and the issue of coming back to the workplace after leaving the battlefield…Life as you knew it is going to be different, and sometimes, people need that extra help,” Bon Jovi said.

One homeless veteran who will be staying in the new facility, Clifton Braxton, shared a little bit about his experience with PTSD.

“When I came back here with those pictures in my head and did not know it was called…” Clifton shared, “It took me another 20 years before I could get a handle on that PTSD.”

Clifton has experienced a deep sense of relief knowing that he will have a safe place to call home.

Providing housing alone is often not enough to fully support a homeless veteran, as their condition of homelessness is usually a result of having experienced traumatic situations. Many of the very heightened fears and anxieties which come from being involved in war are felt every single day by these poor souls, and Bon Jovi knows it.

The Walter Reed facility will be a safe haven where homeless veterans can get the psychological help and warm, friendly and relieving environment they need.

“You tend to find social isolation in veterans coming off the streets,” explains David Cleghorn, HELP USA’s chief housing officer. He explained that many homeless veterans after getting housing can, “close the door, lock it, and never come back out again, because there’s a survival mode they get into. . . . We try to develop spaces in the building that will encourage veterans to spend time together.”

Bon Jovi’s foundation worked together with the non-profit Help USA to construct the apartment facility for homeless veterans. It includes a courtyard, a small gym, a computer room, and a lounge with a cozy fireplace. The compassionate project has been in the works for more than ten years, and it’s finally getting ready to open.

The beautiful new $13 million facility expects to help more than 300 residents. Those with 50% or less of the median income can qualify for housing. The residents will pay 30% of their total income from their jobs and social security, whatever it may be, for rent.

This is not the first time that Bon Jovi has been known to help the poor and the homeless. The Jon Bon Jovi Soul Foundation has helped provide funding for over 600 units of affordable and supportive housing in 10 states for thousands of people, including children and veterans. He also runs the JBJ Soul Kitchen; a restaurant that has no prices, but where people can donate or volunteer for a meal.

Bon Jovi also released a new single dedicated to the struggles of homeless veterans called Unbroken. He is donating all proceeds from the song to the Patriotic Service Dog Foundation, which pairs service dogs with veterans and first responders. Some of the lyrics of his new song include:

“God of mercy, God of light,
Seek your children from this life
Here these words, this humble plea
For I have seen the suffering
And with this prayer I’m hoping
That we, can be unbroken”

“Today, 22, would die from suicide
Just like yesterday, they’re gone
I live my life for each tomorrow
So their memories will live on”

“And Christ, I am sweating through these sheets
Where’s my brothers? Where’s my country?
Where’s my how things used to be?”

In response to the facility opening, one thankful person commented: “Thank you, Jon Bon Jovi. You may have saved more than a few veterans from suicide today. We all need hope.”

Another homeless veteran and soon-to-be resident of the Walter Reed facility, Latisha Austin, shared just how excited she is to have a place to call home after having had a tour of the apartments.

“It just feels so clean,” she shared. “I won’t have to worry about a roof over my head.”

Latisha took a video on her phone of the apartment, and to lift her spirits each time she feels down, she watches it.

“I always go back to that video whenever I’m feeling impatient,” she said.

Bon Jovi’s beautiful heart continues to share so much love with our homeless veterans, and they are so deeply grateful for it.