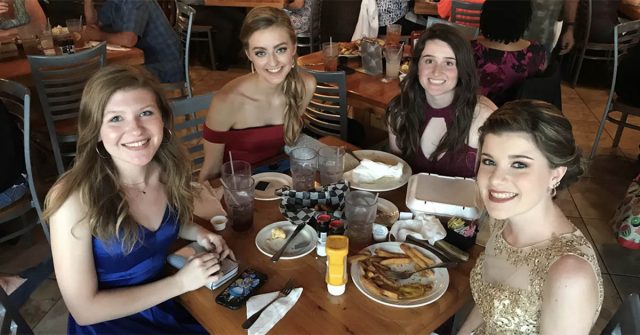 When a group of kind ladies paid for the meals of several young girls before their high school dance, they decided to pay it forward by bringing breakfast to the homeless the next morning before school.

Emily Hermanson and her friends, Alena Burns, Savannah Cantrell and Allie Lubas got dressed up for their high school dance in Titusville, Florida, and they went to a nice restaurant beforehand to celebrate. While eating at Shiloh’s Steak & Seafood, a group of ladies nearby complimented them on their dresses and made friendly conversation with the girls.

When the girls tried to pay after their meal, they learned that the kind ladies had already taken care of their bill for them. The girls were moved, and decided that they wanted to pay the kindness forward.

“We were so surprised. Instantly, we were like, ‘We have to do something,'” Savannah said.

The girls went to their school dance and had a wonderful time, but the next morning the act of kindness from the kind ladies was still very much on their minds.

They considered going to a cafe and paying for people’s coffees, but they all decided that they wanted to instead get donuts and coffees and bring them to the homeless.

The girls went to Dunkin’ Donuts and bought as many donuts, coffees and bottles of water that they could carry, and then drove through the city looking for those in need. They found and gave breakfast to people holding signs, a woman camped out near the woods, and many others who looked hungry.

“They were such good people and so grateful for anything you could give them. These people are sitting on the side of the road. They don’t have a home and they were humble and happy,” Emily said.

“We just like to spread love and kindness,” said Savannah. “You don’t have to go that far out of the way to make someone’s day.”

To my family and friends: just want to say thank you for being in...

His Wife Took This Photo And Then Wrote This Viral Message Explaining The Definition...

Child Runs Into Man’s Car With A Broken Bike, Instead Of Yelling At Him,...