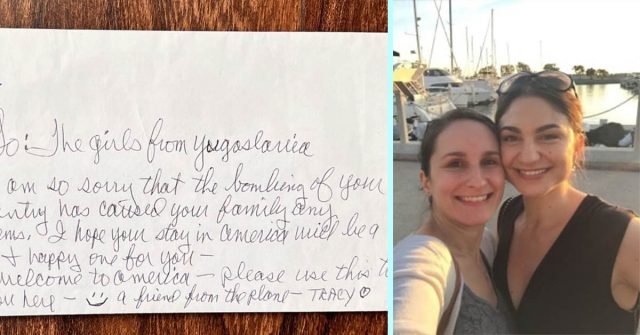 When two young sisters fled Yugoslavia as children, a kind stranger sitting next to them on their flight gave them a note with $100 inside, and the kind gesture has stayed with them ever since.

Ayda Zugay was 11-years-old when her and her sister fled the war in Yugoslavia and made a long journey to find a safe home in America. She remembers bombs falling all around them as they were leaving, which for anyone, especially a child, can be traumatic. On a connecting flight from Paris to the U.S., Ayda and her sister, Vanja, sat next to a kind woman named Tracy with a tennis racket. Tracy shared with the young girls how she had played tennis in Paris, and the girls, who could only speak a little English at the time, opened up to her and shared how they had just left their home due to war.

Tracy may not have known it at the time, but the young girls had nothing with them, not even a single dollar, and had been given the flight tickets by a family member.

“We actually didn’t have anything with us,” Ayda said with a tender smile. “We had no money, not even a dollar.”

Before they arrived, the kind woman sitting next to the young girls handed them an envelope, and asked them not to open it until they got off the plane. When they later opened it, they found a nice pair of earrings and $100 inside.

The envelope also had a kind note welcoming the young girls to the States which read:

“To: The girls from Yugoslavia.
I am so sorry that the bombing of your country has caused your family any problems. I hope your stay in America will be safe + happy one for you – Welcome to America – Please use this to help you here – 🙂 A friend from the plane – Tracy ❤️”

To the young girls escaping a scary situation and entering a foreign land by themselves, which they had never been to, the welcoming note and kind gift from Tracy was deeply meaningful for them. They also noticed that Tracy had underlined the word “safe.”

“It was the first time that I felt, like, relief. This is a safe place, and we can build a future here,” Ayda shared. “I think that’s why the letter really resonated with me at that time, because we went from like this drastic horror into this beautiful act of kindness.”

Ayda remembers the moment when they opened the letter together and found the $100 inside.

“On the outside of the envelope was an amazing message of welcome,” she said.

“We both just looked at each other, me and my sister, and just hugged each other. Because that’s all we had… and it was just amazing that somebody was willing to spend that kind of money on us.”

The $100 really helped the young girls get by as they arrived, as they survived by eating pancake mix for an entire summer.

As the girls grew up, they moved around a bit and did not have many things to call their own, but one thing that Ayda always kept with her was the kind letter that the woman on the plane had given her.

Fast forward 23 years later and the girls have grown up, and both of their lives have been beautifully shaped by the act of kindness from the woman on the plane. Ayda graduated from Boston University and works with non-profits in Boston which are helping make the world a better place. Her sister, Vanja, is now a doctor and helps people daily.

As adults, and after holding on to the letter from the plane for so long as a source of hope, the girls wanted to see if they could connect with Tracy to give her a heartfelt thank you. They searched online and contacted hotels to see if they could find their guardian angel Tracy, but were not able to. They shared their story online with a photo of the letter asking if anyone knew who Tracy was, and the media soon picked up the story. One of Tracy’s daughters, and also Tracy’s tennis coach, recognized the handwriting and let the girls know that her name was Tracy Peck and that she lived in Minnesota.

In the past Tracy had been given a chance by her tennis coach’s company, Love To Travel, with 18 women to fly to Paris to watch the French Open, and it was on the trip back that she had sat next to Ayda and Vanja.

The girls were able to then connect on a zoom video call with Tracy and her daughter, and to tell her thank you. Tracy shared how she clearly remembered meeting the young girls on the plane.

“It just touched my heart so much that I just felt compelled that I had to help you in some way,” Tracy said. 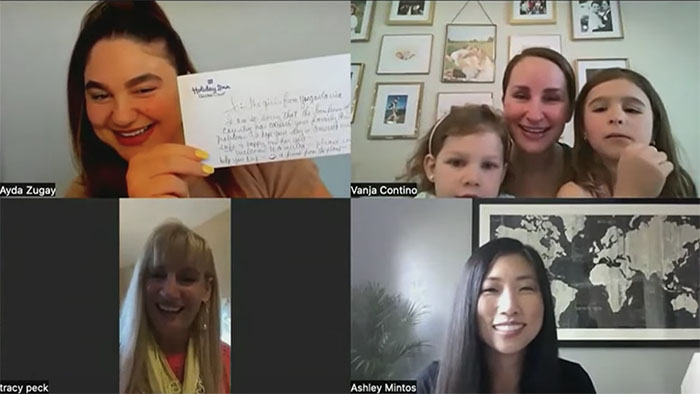 “Your generosity is still in me because I’ve been paying it forward ever since,” Vanja shared with Tracy.

Watch this heartwarming video of Ayda and Vanja finally connecting with Tracy:


Please share kindness with others: when we share stories and examples of compassion and kindness, we inspire and encourage others to be kind and compassionate in their daily lives, making the world a better place for everyone.

Instead Of Buying A Yacht, He Decided To Pay For 26 Kindergartners To Goto College

Hero Cop Handcuffed Himself To A Woman Who Was Close To Committing Suicide, And...

Dwayne Johnson Opens Up About His Past Struggles with Depression

What Your Egyptian Zodiac Sign Says About Your Life? The Accuracy Will Stun You