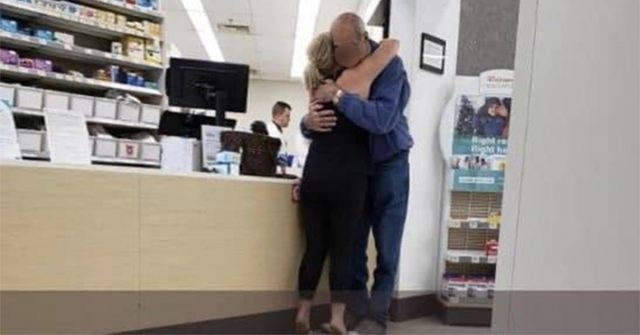 When an elderly man was worried about the price of his prescription medicine and considered ordering less, a kind woman stepped forward out of the prescription line and paid his entire bill.

A young woman was standing in line for a prescription at Walgreens and overheard an elderly man at the desk discussing payment for his medicine with the pharmacist.

“OKAY, I just saw the most amazing thing today,” she shared in a post online. “I was waiting for my prescription at Walgreens, and I noticed this man picking up his medicine.”

The elderly man appeared nervous, and asked the pharmacist how much his total was. After a bit of discussing, she asked him if he would prefer to only get one month’s worth of medicine instead of three, to lower the price.

“He is asking how much they are, and starting to get nervous about the price. The total was $170, and the pharmacist asked if he would rather only get one month of his medicines instead of three.”

As the elderly man was deciding what to do, another woman in line walks up to the desk and tells the pharmacist that she is paying for all three months of his medicine.

“THIS lady next to me, walks up to them and says, “NO, he is getting all three months,” and pays for his bill. I was walking out of there with tears in my eyes, what an amazing woman…”

The kind woman and the elderly man shared a hug.

Many hearts online have been moved by the compassion this woman showed to the elderly man.

“Your story made me cry… Thanks for sharing it,” wrote one grateful heart.

She Asked For A Free Cup Of Warm Water, But Instead He Stepped In And Bought Her As Much Food As She Could Carry

Do you think you had a better childhood without the cell phones, tablets and...