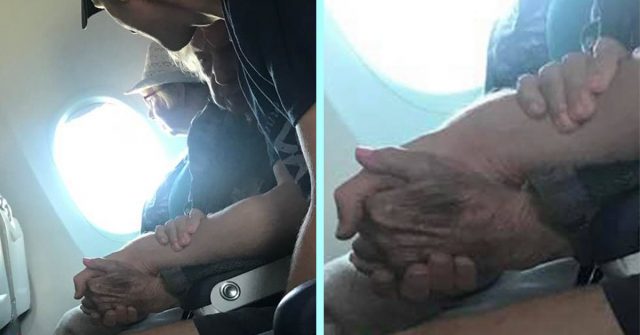 When an elderly woman who hadn’t flown in 15 years went to visit family and was worried about flying, a kind stranger sitting next to her gave his arm for her to hold, and she was comforted as they held hands during the flight.

Megan Ashley was flying from San Diego to Nashville when she overheard a conversation between a 96-year-old woman and a young man who were sitting in the row next to her.

“On my flight from San Diego to Nashville today, sitting in the row next to me was a 96 year old woman who hasn’t flown in 15 years,” Megan shared in a post online.

The older woman was traveling to meet her family for her birthday, but she hadn’t flown in 15 years, and she felt nervous about flying.

“For her birthday she wanted to go to Kansas City to see her family but she was scared of flying.”

She explained that she hadn’t flown in a while to the young man sitting next to her, and asked if she could hold his hand if she felt nervous. He gladly agreed and comforted her by holding hands.

“She asked for this man’s hand during takeoff and then hugged him again when experiencing turbulence. This gentleman I should say, gladly took her hand, let her hold onto him, calmed her by talking to her and explaining everything that was happening, and simply was that stranger there for her. He knew just what to do the entire flight to help.”

The kind young man helped her stand when she needed to use the restroom, and after their flight, he held her bag for her, walked her to her wheelchair, and stayed with her until she met with her family.

“He helped her stand up to go to the restroom and watched her carefully walk down the aisle. It made me smile the whole flight as he comforted her. This man was her flight angel. He held her bag, helped her get off the plane and into the wheelchair, and when she got confused wondering where her daughter went, he stayed with her until she caught up with her daughter who got separated from her.”

Megan was moved to tears after seeing the sweetness and gentleness the stranger showed to this 96-year-old woman.

“I walked away sobbing happy tears being so thankful for people like this wonderful human. She was so grateful that she wanted him to have her flight pretzels. 😇 Hats off to you sir, for your kind heart and your compassion toward someone whom you’ve never met. I have never been so touched on a flight before. This truly made my week 💜”

Hundreds of thousands of hearts online have deeply appreciated the young man’s kindness.

“This brought tears to my eyes! Thanks for sharing!” commented Ashley C.

“Aww, I’m sitting here crying as I’m reading this, what a beautiful soul this man is ❤️” wrote Sheri W.

“This should be in the Headlines of the Newspaper!” wrote Patti D.

“My heart is so filled 😭😭😭” commented Candice D.

“Thanks for sharing this. This is how our heavenly father wants for all of us to behave. Wonderful blessed day indeed,” wrote Diana P.

Holocaust Survivors Warn Of The Rhetoric That Led To Genocide: ‘Never Let It Happen...