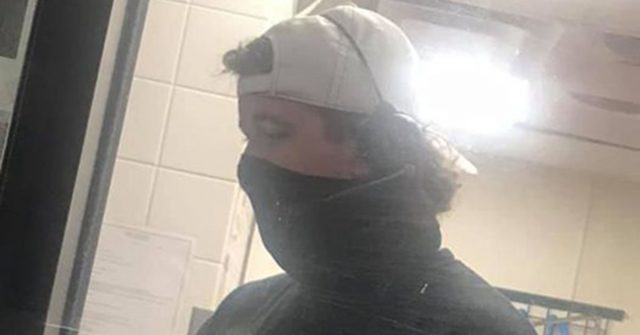 When Brittany Reed had three crying children in her car, she thought that the best way to cheer everyone up was by taking them out for some McDonalds drive-thru for dinner. Yet after she had ordered and pulled up to the cashier’s window, she herself was nearly in tears as she just then realized that she had forgotten her purse at home.

Brittany apologized to the cashier and asked him to please cancel her order, but before she could finish speaking, the kind cashier reached into his pocket and paid for their meal using his own debit card. The teenage boy’s kindness meant so much to Brittany that she wrote a thank you note online, hoping it would reach his parents:

“I am praying this reaches this young mans parents!!!,” Brittany wrote. “Tonight as I was leaving football practice with my three kiddos my 4 year old was so tired he started crying and acting a fool as we were getting in the van. My 7 year old daughter started crying because I told her we were having red potatoes as a side for dinner and clearly she wasn’t a fan sooo I threw my hands up and said FORGET it – McDonald’s tonight !!”

“We go through the drive through order food all three kids are now crying for one reason or the other I go to pay – I LEFT MY PURSE AT HOME. Welp now I wanted to cry. I look at the young man with tears in my eyes just from being stressed and annoyed and say “hun I am so sorry but I have to cancel that order I left my purse at home when we went to football tonight” WITHOUT HESITATION he takes out his wallet and swipes his card before I could even say “no I will be right back!” I was like wait no hun it’s ok I will come back through then he replies ‘no it’s totally fine, my pleasure.'”

Brittany took a quick picture of the young man and drove back home to get her purse so that she could repay him. He tried to talk her out of paying him back, but Brittany insisted.

“I snapped a quick picture and asked his name to which he replied Wyatt Jones ma’am. I told him I would be right back with cash for him & he tried hard to talk me out of it.”

“I just want his parents to know how KIND & COMPASSIONATE your son was tonight! He made this stressed out momma pause for a moment and realize this is exactly what we parents are trying to do, raise great humans. Well Wyatt sir, you are an amazing human!!!”

“I went back and handed him cash and had to make him take it because he didn’t want to take more than he had paid but I wanted him to know that when you put good out in the world it comes back to you ten fold! Wyatt, do not let this world change your kind heart young man for its people like YOU that will change this world for the better!”

Wyatt’s kindness has been appreciated by millions of people from around the world. They asked Brittany to setup a GoFundMe for the kind cashier, and together people raised more than $34,000 for Wyatt as a way to thank the young man. She found out that Wyatt has been working to save up for a car, so this will be an amazing new car as a reward for his kindness.

Wyatt was later interviewed by a local news team with his mom, and to the interviewer’s surprise, Wyatt had not even told his mom how he helped Brittany and her children, because he did not think it was a big deal.

“The news team was at mcdonalds and the mcdonalds phone was blowing off the hook my step son said. It was all for Wyatt,” shared Amy R.

“Best post I’ve seen in awhile and brought tears to my eyes. His parents should be so proud of the empathy and compassion he showed. It was a beautiful post to read! I hope Wyatt is rewarded tremendously!” wrote Traci C.

“His parents should be proud..they raised a caring compassionate young man..this brought me to tears 😢..thanks young man for caring enough to help this mother who so very much needed it…!!” commented Tammy S.

In San Francisco, Buses Are Being Turned Into Showers To Help The Homeless