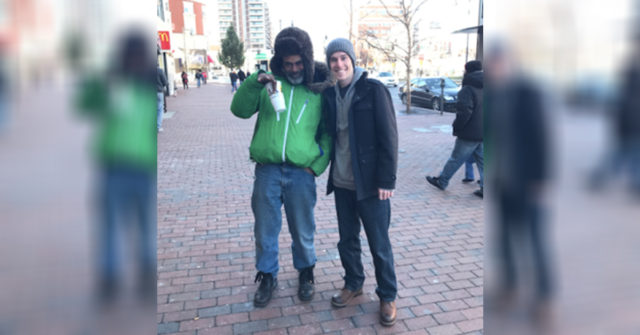 Boston University student Blake Smith was tasked with a project for his communications class; to convince people to think about something differently. He immediately thought of a local homeless man named Freddy. Freddy is known for “always sending good vibes” to people who walk by him, said Blake, who passes by Freddy everyday on his way to class. Within a short time, Blake and Freddy became friends.


“A lot of people just kind of ignore homeless people or think they’re lazy and that’s why they’re in that position,” Blake said. “But Freddy sits out in the cold at 30 degrees… that’s not someone who’s lazy. That’s someone who walks all the way from Boston hospital, because there’s a shelter there that he’s at, and he walks all the way to Kenmore just to get a couple of dollars every day for food.”

Blake was able to make a short video telling the story of a young wealthy man who passes by Freddy on the street, then throws out some of his food. He goes home to a fridge and cabinets full of food, but cannot find what he wants to eat, so he orders some take-out from a restaurant. When he picks up the food, he sees Freddy again, and has a change of heart. He decides to share his meal with Freddy, and they sit down and enjoy it together.

“I learned from this video to be grateful for what you have,” said Blake. “Maybe you don’t need the new iPhone, but you could help somebody else. Take the time to stop and talk to somebody, see how their position is in life.”

After getting to know Freddy, Blake decided to setup a GoFundMe page to try and raise some money for Freddy as a holiday gift. Within a few weeks, Blake was able to raise over $1,000 and gifted it to Freddy right before Christmas. “He gave me a huge hug and was really happy for everything. He was overjoyed, and he told me that he was going to go get a room and get out (of) the cold and try to get a place to stay for a little while.” said Blake.

A post shared by Understanding Compassion (@understanding_compassion) on Mar 14, 2018 at 10:40pm PDT

Blake hopes to continue helping people like Freddy. “I didn’t want to just make a video to get a good grade, I was kind of sick of doing projects that way. I wanted to do something that could help someone outside of class,” said Blake. By taking just a little bit of time to make a difference in the life of someone who was struggling each day in the cold, Blake was able to show Freddy how loved he is, and with the help of the community, to provide a warm place to sleep for the holidays.

See Also: The Secret Santa Of Kansas City Spent Over 30 Years Handing Out $100 Bills To Those Who Needed Kindness

Orphaned Burn Survivor Gets 1,000,000 Christmas Cards And $433K In Donations From Kind Strangers

An Anonymous Spider-Man Is Feeding The Homeless At Night, Showing Us That Everyone Can...