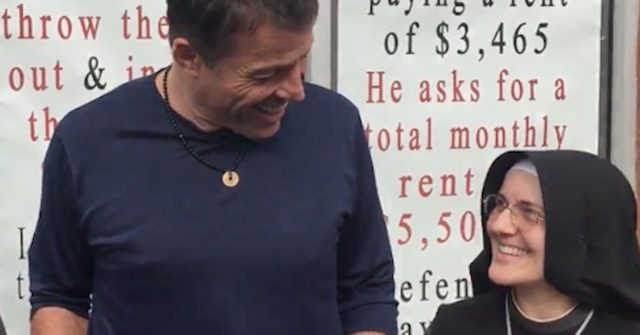 Sister Mary Benedicte and Sister Mary spent their days serving warm meals to hundreds of San Francisco’s homeless each day at their soup kitchen, until they were faced with eviction from rising rent prices.

The kitchen’s landlord informed the nuns that their rent was being increased by 60%; from $3,465 to $5,000 per month. Without any way to afford the rent increase, the sisters knew that they would likely be evicted from the property, leaving hundreds of San Francisco’s poorest without a way of finding food.

If you’ve spent any time in San Francisco, it’s likely that you’ve seen the large homeless population living there. Homeless grandmothers walk slowly from trashcan to trashcan, picking out tossed away leftovers of food to eat in order to survive. Without families and with no one to help or to love them, it’s quite heartbreaking to see so many lovable people in such desperate situations. The importance of having soup kitchens where the homeless can get a warm meal served by kind and loving people is without question.

With no where else to turn, the nuns reached out to the media to raise awareness of their situation, and The Chronicle featured a story about the soup kitchen and the eviction it was facing. The self-help guru Tony Robbins, who gives motivational trainings to former Presidents and to current CEOs, read the article and was moved to help the sisters.

Tony secretly flew to San Francisco and met with the nuns, and at the end of the meeting he handed them a personal check for $25,000. Tony had been homeless for a time himself in the past, growing up poor and on the streets. He often tells the story of how a stranger once gifted his hungry family a basket of food: an act of kindness he would never forget.

The generosity of the stranger prompted him, when he was older and financially independent, to create a charitable personal foundation. The foundation helps 2 million people worldwide by giving clothing and food to the poor. Every year, Tony and his wife also match that amount to assist 4 million struggling people in total.

“I was so inspired by their story,” Tony Robbins said. “I was deeply touched that not only are they feeding people, but their entire lives are spent toward loving and taking care of people.”

After securing the rent for the soup kitchen and preventing their eviction, Tony wanted to do more to help the nuns find a more stable and reliable location where they could continue helping the homeless of San Francisco. Together they happened to find a good building that was for sale, and Tony decided to himself pay $750,000 cash to purchase the building for the nuns and their beautiful cause.

“I was struck by it, and I trust my instincts. I have a deep love for the nuns, and I want them to be able to put all their efforts into doing the wonderful things that they do,” Tony said.

“Finding this building is really like a resurrection for us… we were praying so hard, and then God sent Tony to help us,” Sister Mary said.

Robbins shared that supporting the nuns’ dedication to feeding the homeless seemed like a natural extension of his personal philanthropic work to fight poverty around the world.

The nuns are now able to continue serving warm meals made with love to the thousands of grateful homeless living in San Francisco at their new Fraternite Notre Dame Mary of Nazareth House.

If you have some extra time during the week, consider volunteering for a local soup kitchen or a charity which helps the homeless. Sharing love with those who need it the most not only helps them, but it can be a loving experience that you treasure for the rest of your life.

See Also: Compassionate Restaurant Sets Up “Take One Leave One” Coat Rack For The Homeless

A post shared by Understanding Compassion (@understanding_compassion) on Oct 16, 2018 at 1:27pm PDT

Kind Waitress Holds And Gently Calms Woman’s “Fussy” Baby So She Can Finish Her...