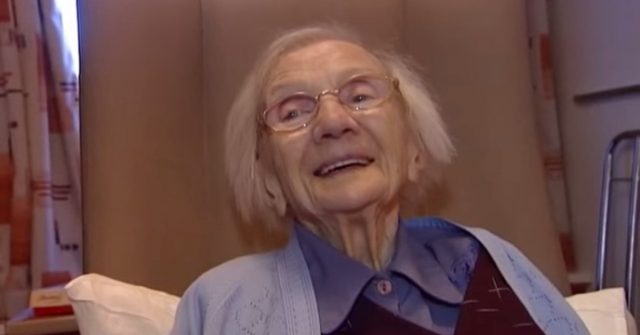 Scotland’s oldest woman, Jessie Gallan, shared her secret to living a long, happy and healthy life in a recent interview. She revealed two secrets which are both simple and even a little amusing.

If you want to live a long and healthy life Jessie says, then eat porridge for breakfast every day and most importantly, start avoiding men.


Jessie was born in a small two room farm cottage at the beginning of the 1900’s, and she slept “top-to-tail” with her five other sisters and one brother on a mattress made of straw.
Her initial secret which she revealed when she turned 108 was eating porridge daily, grains which are ground down and boiled in water or milk (oatmeal is a porridge), but on her 109th birthday she added staying away from men for those seeking longevity.

“The secret to a long life has been staying away from men. They’re just more trouble than they’re worth,” Jessie said in an interview.

She reported that she also, “made sure that I got plenty of exercise, eat a nice warm bowl of porridge every morning and have never gotten married.”


The vibrant and slightly humorous 109-year-old has been independent her whole life. She had worked hard ever since she was a teenager; leaving home when she was only 13 and earning a living on her own. Since her teenage years began she has been working and decided to never marry.

“I worked hard and seldom would I ever take a holiday,” Jessie said.

A national survey of people who are over 100 years old was done in the United States, and it found that the study showed the secrets to long life include plenty of time with friends and family and a commitment to fitness.

See Also: The Kind Of Woman You Are According To Your Sleeping Position

Get to know Jessie in the video below.

Kind Cashier Used His Own Card To Buy Order For Boy Who Was Short...