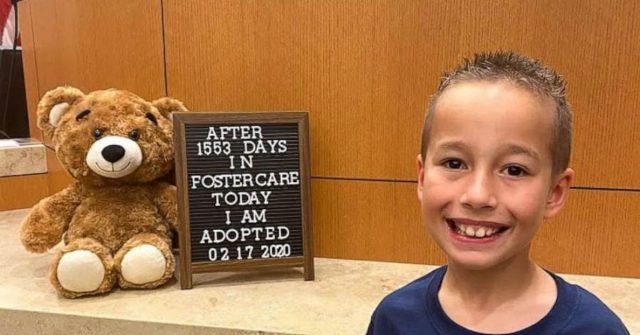 After 1,553 days in foster care, 8-year-old Nike Schwartz is now an official member of his new family, with more than 300 people coming to support the smiling little one at his adoption hearing in Collin County, Texas.

Nike first came to his adoptive family at the age of four as a foster child. Kristi and David Schwartz received a call from Child Protective Services asking if they could foster a 4-year-old boy whose current foster family wasn’t working out.

“We got a call asking to take him in and we said yes and he showed up at our door at midnight,” Kristi said.

Kristi and David have been foster parents for more than 11 years and they have two other children; a 17-year-old biological daughter and a 10-year-old adopted daughter. The Schwartz family was not planning on adopting another child, but then they got to know Nike. Kristi said that she felt a connection right away with him after they spent some time together.

“You see these kids in their most rawest form and you just feel this maternal instinct to want to provide that stability for them. For me and Nike, it was pretty quick that I knew that,” she said.

The custody rights of the young boy’s biological parents were released in 2017 due to drug use, but court battles delayed the ability for Nike to officially be adopted. But after 1,553 days, Nike’s adoption was finally able to go through.

The Schwartzes wanted to make Nike’s adoption day very special, so they created family t-shirts with the phrase “May the Schwartz be with you.”

They also invited 300 of their family members, friends and adoption officials to the hearing who had been a part of Nike’s journey. More than 20 of Nike’s 2nd grade classmates came to support him at his adoption, as well as his older sister’s high school drill team, who brought pom-poms to cheer for the little one.

“It was just overwhelming. I can’t think of a better word for it,” said Kristi. “It was unbelievable to see everyone who came out and supported our family and who have supported us through all of this.”

Buckner International, a Christian non-profit which specializes in adoptions, had helped the Schwartzes with Nike during their journey. At his adoption hearing, they presented Nike, who is a big Dallas Cowboys fan, with an official NFL football that had been signed by the entire Cowboys team. Kristi shared that this was another wonderful highlight of his day.

The program director for Buckner International, Andi Harrison, also attended the adoption hearing, and he said there was not a dry eye in sight.

“It’s just heartwarming to see how much love people had not only for Nike but for the entire family,” Andi said. “It brought tears to your eyes to see that it’s all finished and he can move forward and be comfortable knowing that no one is going to remove him from that home.”

Nike now knows that he will be loved forever by his forever family.

There are more than 400,000 children in the foster care system in the U.S., and foster services are still looking for loving homes to help a growing need.

“There is a desperate need of homes for children who are over 8-years-old, for larger sibling groups and for children with bigger needs,” Andi explained. “We are desperately looking for additional foster care parents that will not only provide short-term care but long-term care.”

“We really just need families that stand in the gap with these children and are there for them, whether it’s 30 days or something long-term like adoption. There’s a lot of fear in the unknown, but when you work with professional organizations or agencies in your local area, they know how to train you and prepare you, so don’t let fear stop you from loving on our children.”

Watch this adorable clip of Nike’s adoption hearing, You are Loved:

Kind Hairstylist Spent 8 Hours Combing The Dreads Out Of Woman With Severe Depression’s...

Child Races To Get The Foul Ball, Then Turns Around And Kindly Gives It...