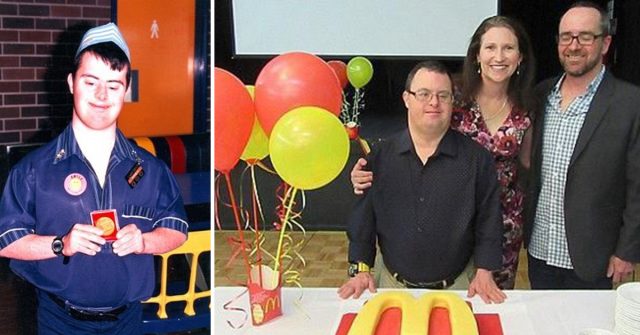 Confident, cheeky, and charming. These are the three words that best describe Russell O’Grady, a wonderful person with Down Syndrome who has spent the last 32 years giving outstanding service at the Northmead McDonalds in Sydney, Australia. He was an iconic employee for McDonalds as he was one of the first people with a disability welcomed into the McDonalds workforce. Now 50-years-old, he is saying a heartfelt goodbye to his career and is set for retirement.

O’Grady began working with McDonalds back in 1986, when he was just 18-years-old. He had participated in a project with the compassionate organization Job Support whose goal was to provide support and opportunities for job seekers with intellectual disabilities.

Since the day he first put on his uniform, O’Grady gave it his all; being reliable, consistent, hard-working and an overall nice guy. He won the hearts of many customers as well as fellow employees over the years, and became an icon of Northmead, attracting regular customers on numerous days of the week.

O’Grady’s family could not help but express how proud they are of him.

“He’s kind of blasé about it but loves his work very much. He’s pretty cheeky sometimes. He’s my big brother and he keeps me in line,” Lindsey O’Grady, Russell’s brother, shared with The Daily Telegraph.

Now that O’Grady is planning to retire, a lot of regular customers are happy for him but they are also really going to miss seeing his bright smiles every week.

“We’ve got regular customers who come in to see Russell on Thursday and Friday, and the staff look after him, so we’re going to miss him.” Courtney Purcell, a supervisor at Northmead McDonalds said. His positive attitude draws a lot of people to visit him each week.

“From time to time if he’s not on they actually won’t come in to visit us because they are really keen to see him,” she explained.

“He’s very affectionate, dearly loved and appreciated, to such an extent that we just don’t believe it,” Mr. Geoff O’ Grady, Russell’s supportive dad shared. He mentioned how there have been many times where, when the two of them were simply taking a stroll down the street, that people nearby would stop what they were doing just to shake hands with Russell.

Russell’s Dad shared how his son’s attitude and positive career helped to shape his own outlook on life. One question in particular, which he had heard his son answer in the past, had stuck in his mind;

“Somebody said to him ‘are you handicapped?’” Mr. Geoff recalled. “and his answer was ‘I used to be when I went to school, but now I work at McDonald’s’”

Stephen Hawking once beautifully and famously said, “Disability need not be an obstacle to success.” His words were true, as Russell O’Grady, a beautiful human being with Down Syndrome has spent the last 32 years proving. He was able to showcase some of his skills and talents and did a wonderful job.

The compassionate organization Job Support also deserves a lot of praise as they’ve been lovingly helping people with disabilities find opportunities where they can succeed for over 30 years.  It’s extremely beautiful to even simply see some of the photos containing smiles of the lovable people they’ve helped on their website; jobsupport.org.au.

Job Support not only aims to provide work for those with disabilities, but they have a solid training program in place which helps them turn jobs into long-term careers.

This inspiring video shows the story of Russell O’Grady; how he changed the perspectives and opinions of the people around him to have a more compassionate and respectful view towards lovable people with Down Syndrome:

“There is no greater disability in society, than the inability to see a person as more.”
~ Robert M. Hensel

See Also: Beautiful Moment As 88-Year-Old Father Reunites With His 53-Year-Old Son With Down Syndrome

A post shared by Understanding Compassion (@understanding_compassion) on Mar 1, 2019 at 10:48pm PST

Kind Stranger Bought Woman New Boots After Learning She Had Wanted Them For 5...

Kind Homeless Man Shared Jacket And Blanket With Cold Stranded Couple; They After Got...