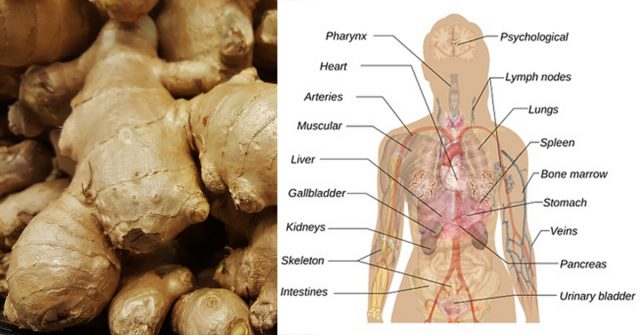 Ginger is more than a common spice found in your kitchen cabinet. For practitioners of Ayurveda, it is often referred to as the “universal medicine” – and rightfully so. Ginger is known to cure a long list of ailments including joint and muscle pain, flatulence, nausea, stomach cramps, and many other conditions.


Because of ginger’s numerous health benefits, a lot of ginger-infused recipes and formulas have been created throughout history. But have you ever wondered what would happen after consuming ginger daily for 30 days?

Did you know that it is common practice in India to use ginger in chai tea? Infusing ginger into a chai drink is said to prevent the flu and common colds. Ingesting ginger every day for a month will result in the following:

The phenolic compounds contained in ginger have been shown to help relieve irritation in the gastrointestinal tract. One study found that taking 1.2 grams of ginger powder before meals reduced indigestion by 50%.

Eating portions of ginger as well as drinking tea with ginger in it is a common home remedy treatment for nausea. It is often used by pregnant women, and studies found that of 1200 pregnant participants, consuming 1-1.5 grams of ginger significantly reduced nausea.

Ginger was discovered to reduce muscle pain by as much as 25% during a study conducted by the University of Georgia. It also has been shown to reduce pain and cramping during a woman’s menstrual cycle.

Studies have shown that ginger extract is effective in reducing pain in certain types of arthritis, namely osteoarthritis. Participants reported less pain and as such, required less pain medication.

5. Ginger may decrease the risk of heart disease.

Eating ginger can open up the sinuses and help to clear them out, similar to the effect of taking apple cider vinegar.

Studies have shown ginger as an effective treatment for lowering cholesterol levels. One study also found that 6-gingerol reduced pro-inflammatory signaling molecules in the colon of participants suffering from colon cancer. Several studies have also found that ginger potentially inhibits inflammatory responses in the brain, which possibly helps combat Alzheimer’s, as well as improves reaction time and working memory.

If you are looking to reap the many health advantages of ginger, here are some of the other ways you can utilize this amazing ingredient in your diet:

● Create ginger tea by adding a good amount of grated ginger to boiling water, then mix in some honey to enhance the taste.

See Also: How To Clear Out A Sinus Infection Within Minutes With Apple Cider Vinegar!

The Four Most Common Responses To Grief, And How To Respond With Compassion Instead

Have you ever cried over a dog?