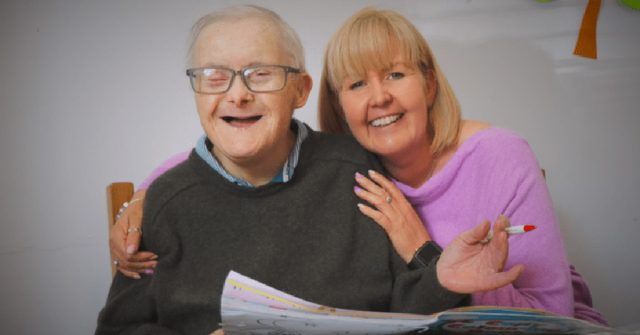 When Georgie Wildgust was born in 1942, doctors told his mother that he wouldn’t live to see his 10th birthday. 77 years later, and to everyone’s joy, they couldn’t have been more wrong.

The mean age for those with Down syndrome was 22 years in 1950. Today, thanks to advances in medical science, early intervention, occupational therapy and speech therapy, that number is almost 60.

Georgie, a retired gardener from Nottingham, England, turned 77 and is believed to be the oldest living person in Britain who is diagnosed with the extra chromosome 21, known as Down syndrome.

“It’s probably because he had such a lovely childhood,” Georgie’s niece, Nikki Wright, explained as to why she thinks he’s been able to live so long. She explained that Georgie grew up being told “that he can do anything.”

In the 1940’s, many children with Down syndrome were sent to live in institutions. But not Georgie. As a little boy, the unconditional love of his mother, family and friends helped him keep a healthy self image, and Nikki believes it’s a big part of why he’s lived such a long a joyous life.

“Nobody picked on him; they all took him under their wing and looked after him. It was one big happy community who looked out for each other. So he’s always been very sociable.”

Georgie was born in Nottingham to parents Abraham and Hilda Wildgust. His father was a mineworker, and his mother a dressmaker. He also has two siblings; a younger brother Colin who passed several years ago at the age of 71, and an older sister Jean, 79, who regularly chats with Georgie online via Skype from her home in Australia. Georgie had a long career as a gardener and also as a rug maker before retiring.

After his mother passed more than 25 years ago, he moved into a disability care home where he currently lives with 12 other residents. He enjoys dancing very much and says that it helps keep him young. He also enjoys coloring and eating an occasional ice cream.

“He is really happy here and is surrounded by 12 other residents who are around the same age,” Nikki said. “He was always told by his mum that he can do anything and because of that, he has always been very independent.”

“He used to do drama classes every week, which he loved. He does less of that now but he does keep busy.  He also enjoys going to the seaside and having fish and chips and ice cream.  I think being kept busy and socializing here has really helped him. The staff are amazing and it is such a family here.  He is so happy all of the time.  The staff here realize the importance of these friendships and it keeps them all going,” Nikki said.

The care assistants all love Georgie and are inspired by his bright spirit.

“Honestly, every single day you come to work he will make you smile.  He is such a miracle. He has been through some medical issues and he was put on end-of-life care but he bounced right back.  When he came back from the hospital, he just said’ ‘ya alright darling?’ like nothing had happened,” explained care assistance Javine Lacey.

Down syndrome is one of the most common chromosome conditions in humans, affecting one per 1,000 babies born each year. In 2015, Down syndrome was present in 5.4 million individuals globally.

“It’s amazing for him to get to this age. He was always told by his mum that he can do anything and because of that, he has always been very independent. He doesn’t like being told what to do really, but I do think that is why he has reached 77,” Nikki said.

Sweet Georgie Wildgust is proof that children born with Down syndrome can lead long, healthy, satisfying and independent lives when given the unconditional love and support of family, friends and their community. We are looking forward to seeing Georgie dance his way into his 80’s!

Watch the 1 minute video of Georgie below:

A post shared by Understanding Compassion (@understanding_compassion) on Oct 4, 2019 at 2:27pm PDT

Kind Lineman Befriended A Teenager Who Struggled To Make Friends