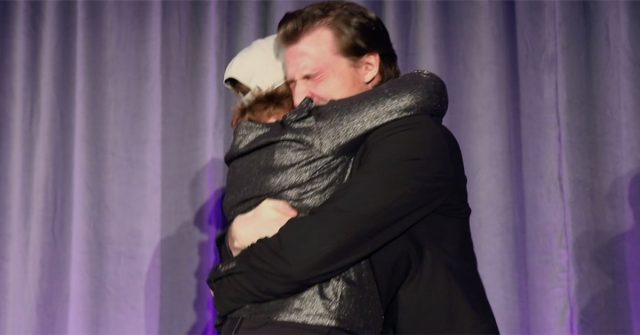 11-year-old Laila Anderson was able to meet, for the first time, the kind young man who donated his bone marrow so that she could have a second chance at life.

When Laila was just 9-years-old, she began to regularly get headaches and would often become unresponsive. One day she collapsed after getting out of the car, and her parents brought her to the hospital.

“She was just a normal kid until one day, and then our whole world got flipped upside down,” Laila’s mother, Heather Anderson, said.

Doctors could not immediately figure out what was happening to little Laila. After 16 months of various tests and two misdiagnoses, they discovered that Laila had Isolated Central Nervous System HLH, a very rare and serious autoimmune disease which causes the body to create too many immune cells, which then begin to attack the body.

“Basically my cells can fight the bad stuff, but they can’t really stop fighting… and my immune cells started fighting each other,” Laila said.

Despite the difficulties Laila was facing, she never let them overcome her joyful attitude and strong spirit. She continued to be an avid hockey fan, regularly attending games of the St. Louis Blues, and was even named a superfan by the team, with many of their players saying that Laila’s winning spirit motivated them.

After her diagnosis, doctors explained that Laila needed a bone marrow transplant to survive, before which this young girl would have to undergo 10 weeks of intense chemotherapy. They explained that they would also need to make sure that a perfectly matched bone marrow donor could be found. This is when 18-year-old Kenton Felmlee first entered Laila’s life.

Kenton is a sophomore studying pre-med at the University of Kansas with plans to one day become a doctor. Growing up, Kenton didn’t get to spend much time with his dad. His father has common variable immunodeficiency disorder, a disorder that impairs the immune system and often left him in the hospital needing treatment or at home feeling ill.

“As I’ve grown up over the years,” Kenton shared. “I’ve realized that he wants nothing more than to have a normal life and spend time with his kids, but because of his condition, he can’t. There are a lot of times he’d come home from work, and be extremely sick.”

After witnessing the stress and pain his father went through as he struggled to stay healthy, Kenton decided that when he grew up, he wanted to help relieve the pain of others.

“That really impacted me to do my best to try to make a change in other people’s lives, so that they didn’t have to go through what my dad and my family had to go through,” he said.

So one day when Kenton heard a presentation by his teacher at a Be The Match drive, he decided to join the registry. Be The Match is a nonprofit organization that helps match patients with bone marrow donors in order to cure life-threatening illnesses.

Just three months later, Kenton received a call while in his car saying that he was the best match to help a 10-year-old girl who needed a bone marrow transplant. They asked if he would be willing to donate, and without hesitation, he immediately said yes.

“I had to pull over because I couldn’t stop crying,” Kenton said. “It was one of the best days of my life.”

Laila and her mother received the good news, and were deeply grateful.

“I got the call saying that one person is a perfect match, and they not only agreed to save Laila’s life, but they said they were excited in capital letters,” Heather said. “Every parent deserves that call saying, ‘We found a match.'”

“I knew this could give her the chance to have a regular life, to be a happy kid,” Kenton said.

Kenton donated and Laila’s surgery was a success. She spent one month in isolation to prevent any possible infection, and a few months later she was able to ring the hospital bell, which signals the end of a successful treatment.

Laila and Kenton still had not met each other in person, but Kenton had exchanged a few letters with Laila and her family, and the two felt a special bond with one another.

“At the end of the letter that Laila had written me, she said, ‘Your best friend, whether you like it or not,'” Kenton shared with a laugh.

Wanting to meet the young man who saved her life, Laila and Be The Match arranged a donor meeting at one of their events. As soon as they saw each other on the stage, they embraced in a heartwarming and deeply emotional hug. Kenton was not just a bone marrow donor for Laila, he had become family.

“We are part of each other now. There’s no separating us,” Laila said.

Be The Match is a wonderful nonprofit that is saving precious lives. If you’d like to help more patients like Laila, please visit their website here.

Fun Test: The Way You Make A Fist Can Reveal A Lot About Your...