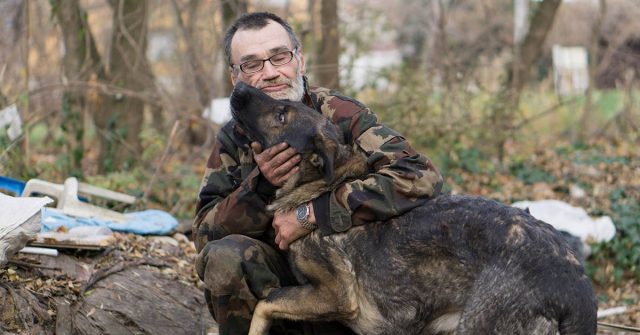 A kind anonymous man decided to bring a homeless person a warm meal and some dog food after seeing him sitting at the side of the road. He ended up employing the homeless man, who was then able to find shelter.

While eating breakfast outside of a drive-thru at Chik-fil-A, the kind man noticed a homeless person sitting nearby on the ground with his dog.

“Last week I was having breakfast at Chik-fil-A and as I was sitting in my truck eating I noticed a homeless guy sitting on the curb behind the building with his dog,” the man explained. “He was holding a sign asking for money or food donations to help feed him and his dog (did not look like a druggy or alchy just an older man down on his luck). I observed him the entire time I ate my breakfast, he mostly just sat there scratching his mutt and holding the sign while people drove past ignoring them. When I finished my breakfast I decided to make another run through the drive-through and ordered a large chicken biscuit combo. As I was leaving I pulled up along side him and handed him the bag of breakfast and a small bag of dog food I had in my truck for when I bring my dog to work.”


After the homeless man was handed the warm meal, and then also some extra dog food for his dog, he broke down in tears; no one had treated him with such kindness for a while.

“The bag of Chick-fil-A put a huge smile on his face but when I handed him the bag of dog food the guy literally lost it and started bawling right there on the side of my truck. After regaining his composure he exclaimed that it had been so long since somebody had treated him like a human being. I asked him if he would be willing to work hard for a decent day’s pay and he immediately straightened up and exclaimed that he could be the hardest worker I had ever seen. I gave him my business card and a fiver and told him to meet me at that spot the next morning and I would put him to work.”

The following day, the kind man picked the homeless man up and brought him to his jobsite.

“The next day I stopped in and sure enough he was waiting there for me, I took him and his dog to the jobsite. He wasn’t kidding about being a hard worker; this guy carried wood around and fetched tools out of my truck for me all day without complaining once. His dog just shadowed him the entire time.”

During their conversations, he learned how the man had experienced such difficulty in his life, and that he had nearly given up.

“During the day I learned about how he had lost his wife in a car accident, had his home that he had lived in for 35 years repossessed by the bank, had no children or family, was staying at a KOA campground, and had a bunch of his life possessions stolen, had been spit on by strangers while begging for money and had all but given up on the human race as a whole. At the end of the day I took him to my bank and withdrew his day’s pay which amounted to $80. The look on his face was well worth it. My random act of kindness seemed to put a spark back in his eye and I continued to pick him up the rest of the week in the same spot and paying him at the end of each day.”

Thanks to the kind stranger, the homeless man was then able to afford camping provisions for severals months.

“Yesterday when I dropped him off he asked me to take him to a different spot, near the KOA. He explained with the money I paid him he was going to be able to afford camping provisions for the next couple of months and told me how much it meant to him and his dog to not have to sleep outside on the cold ground.”

While the kind stranger’s jobsite will later move to the other side of town, he has decided that he will still come to pick up and help the grateful homeless man.

“When I left him last night he looked like a different person then the man I saw hanging his head in shame behind Chik-fil-A. He promised me he would be there for me next week if I needed him and although my job-site is going to be on the other side of town next week I have already decided to continue going out of my way to pick him up and put him to work.”

Thanks to the compassion of the kind man, a homeless man who has faced such difficulty is now feeling loved, valued and human.

See Also: Kind Bus Driver Let A Cold Homeless Man Stay On Her Bus For 6 Hours, Bought Him Dinner And Found Him Shelter

Kind Bus Driver Let A Cold Homeless Man Stay On Her Bus For 6...