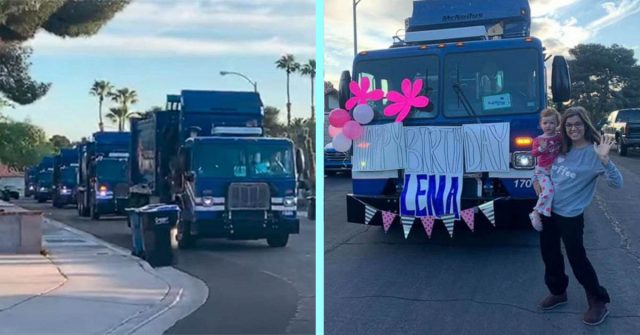 Kind sanitation workers surprised a 3-year-old girl who had befriended them by bringing seven of her beloved garbage trucks to her birthday party.

Little Lena Riley loves garbage trucks. Each week, she runs to her window and watches the garbage truck come to her house, and before long, her and her mother were greeting the Republic waste & recycling workers of Henderson, Nevada, with yummy treats and baked goods.

“If she hears the truck outside and we don’t have something to feed them with, she’ll start to cry and say, ‘We have to feed the blue trucks!'” Lena’s mother, Leslie, shared. “We’ve gotten to know them very well.”

On Lena’s 3rd birthday, her beloved sanitation workers brought seven garbage trucks by her house and they all honked their horns as they passed by to wish her a happy birthday. She was overjoyed.

The trucks arrived in a line, with the lead truck decorated in flowers, balloons and a large sign which read, “HAPPY BIRTHDAY LENA”. They also gave presents to Lena; coloring books, cups and a hat.

“It was just the sweetest. Every truck that came around the corner… [I had] more tears…” Lena’s mother said.

2-Year-Old Waited All Week To Show His Heroes His New Garbage Truck; He Was Adorably Overwhelmed

Is Your Vision Good Enough To Pass This Test In Under 1 Minute? (Good...

Uber Driver Earns College Degree After A Kind Passenger Paid Off Her $693 Tuition...