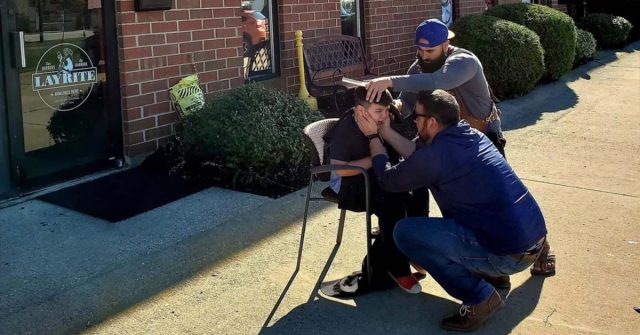 A kind man moved his barber chair outside to help an overwhelmed 7-year-old boy with autism feel more comfortable.

7-year-old Brycen Juby had his first school photo day coming up, and while he normally had his haircut at home, his parents wanted to treat him to a professional haircut in a barbershop.

Brycen was diagnosed with autism at the age of two, and was nonverbal until the age of five.

Brycen’s mom and dad took him to Marky Fresh Barber Shop in Mentor, Ohio, and when making their appointment, they explained to barber Marco Conti that their son can easily become overwhelmed.

“She wanted to bring her son in during a non-busier time of the day, so it would be a little easier on him,” Marco said.

When Brycen walked in, he began to feel overwhelmed, and cried, so Marco asked his parents if he would feel more comfortable sitting outside during his haircut.

“When Brycen and his dad came in, he felt super emotional, crying inside about to get his haircut,” Marco said. “I could tell he felt more comfortable outside, so I was like, right off the cuff, ‘What if we cut your hair outside? Would you feel more comfortable?’ He agreed. I just wanted to make him feel safe and comfortable.”

Brycen’s parents noticed he was able to calm down while outside, and they greatly appreciated Marco’s kindness and willingness to make Brycen’s haircut as comfortable as possible.

“I really didn’t feel like it was such a big deal at the time. I felt like anyone would do that. I just thought it was something that I had to do,” Marco said. “Be compassionate to one another. Even the smallest act of kindness can mean the world to someone.”

Brycen’s beautiful smile with his new haircut warms the heart.

Brycen’s mother deeply appreciates people who are kind and patient with children who are easily overwhelmed.

“You never know someone else’s story… If you see a little kid and he’s super upset, just be kind, be patient, be compassionate, and maybe ask if they need help. A little can go a long way,” she said.

7 Amazing Things That Happen When You Start Loving Yourself More