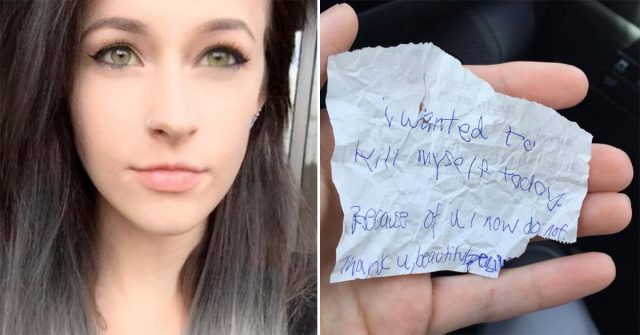 There are times when, at rock bottom, the loving kindness of a stranger can mean the whole world to someone.

While going to get a cup of coffee between classes, a student at Southern New Hampshire University noticed a homeless man sitting on the side of the road picking up change. As she was later in line, she noticed him again for the second time as he came into Dunkin Donuts, and struggled to find enough change to buy something to eat.

She felt compassion for the man as he struggled to come up with enough change for a small bit of food to order, so she decided to start a conversation with him and ended up buying him a bagel and a coffee.

She invited him to sit with her while they drank their coffee, and the two ended up having a deep conversation which was more treasured by the homeless man than she could have guessed. After their conversation, he handed her a small note, and she was later inspired to share it online with the following message:

“Today I went to Dunkin’ Donuts and saw a clearly homeless guy sitting on the side of the road and picking up change. Eventually I saw him stroll into Dunkin, as he was counting his change to buy something I began to get super annoying and talked to him over and over again even when he didn’t really want to talk. Since he had maybe $1 in change I bought him a coffee and bagel and asked him to sit down with me. He told me a lot about how people are usually very mean to him because he’s homeless, how drugs turned him into the person he hated, he lost his mom to cancer, he never knew his dad and he just wants to be someone his mom would be proud of (along with another hour’s worth of conversation.)

This lovely man’s name was Chris and Chris was one of the most honest & sincere people I’ve ever met. After realizing I really need to get back to class Chris asked me to wait so he can write something down for me. Handing me a crumpled up receipt he apologized for having shaky hand writing, smiled, and left. I opened his note and this was it.

‘I wanted to kill myself today, because of u I now do not. Thank u, beautiful person.’ ”

Sometimes we feel compassion for others at specific times and for seemingly unknown reasons. Our hearts have a deep way of sensing and connecting with what others around us are going through. When we listen to this message of love within, we can truly help and be there for others when they need it the most; and sometimes we can even save a life.

The next time you see someone visibly struggling or suffering, consider going out of your way to start up a conversation and to do something kind for them. It’s these little random acts of kindness that make life such a beautiful and loving experience for everyone.

See Also: ‘Do you mind if I sit with you?’ How A Kind Man Showed Love To A Homeless Man Who Ordered $1 Worth Of Food And Sat Alone

A post shared by Understanding Compassion (@understanding_compassion) on Mar 24, 2019 at 1:26am PDT