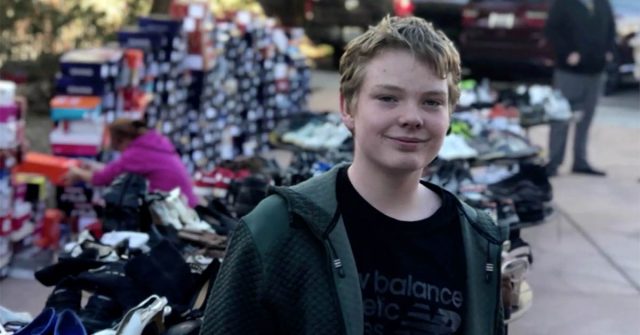 After being bullied himself for always wearing old and worn sneakers, a kind 14-year-old started a charity and has given more than 25,000 pairs of shoes to people in need.

Kyler Nipper has a condition called idiopathic toe walking, where shorter than normal Achilles tendons prevent his heels from touching the ground when he walks. To walk, he usually places his balance on his front tiptoes, and his different way of walking causes his shoes to bend in the middle and often come apart.

When Kyler was 11-years-old and a 6th grader in middle school, he was subjected to bullying for around a year over his worn shoes.

“At my school, shoes were a really big deal,” Kyler said. “You had to have a certain kind of athletic shoes to be cool… like Air Jordans. Mine were black and white tennis shoes from Walmart.”

Kyler was attacked at one point in his school hallway and was left in the hospital using a breathing tube for three days. His bullies were arrested, removed from school and put on probation, but after leaving the hospital and returning home, young Kyler was also diagnosed with PTSD.

“It’s the nightmares, the flashbacks, the everyday PTSD struggle is real. Man, it’s real,” Kyler’s mother said. “He didn’t want to come out of the apartment. He didn’t want to talk to anybody. He was scared of his own shadow.”

Kyler didn’t want anyone else to suffer from bullying for having old shoes, so he made a cardboard shoe donation box and put it outside of his family’s apartment. He planned to give the shoes that were donated to the box to anyone in his school or community who needed a new pair of shoes.

“Kyler’s Kicks,” he wrote on the box. “Please donate shoes for those in need.”

Over the next four months, a large number of people donated shoes towards Kyler’s cause. A local business even donated the use of their party bus so that Kyler could drive through low-income neighborhoods once a month to hand the shoes out. When Kyler would drive through, families would hop on the bus and choose whichever type of shoes they liked.

Kyler’s medical bills from his hospital stay and treatment began to be too much for his family, as the expense came to more than $2,000 a month.

“There were just too many to keep up with,” Sherise Nipper said.

Unable to afford their apartment, Kyler’s family became homeless and moved from Colorado to Las Vegas, where they were able to rent a reduced price studio apartment in a community for homeless veterans, as one of their family members was a veteran.

After the move, Kyler kept continuing his charity work, and now as a 14-year-old he has helped donate more than 25,000 pairs of shoes to at-risk children, teenagers, the homeless and to those in need.

Lady Gaga’s Born This Way Foundation and Zappos for Good have partnered with Kyler and now regularly donate wonderful pairs of shoes to his charity.

“I’m so proud and impressed with his work in the community,” said Maya Smith, executive director of Lady Gaga’s Born This Way Foundation. “Young people like Kyler are the key to building a kinder, braver world for us all.”

Kyler has setup several “Kyler’s Closets” at local schools, where he regularly brings his shoes to and students can come in private to have any pair that they like. A social worker who helped with the project, Linda LaHodny, shared how grateful she’s seen some of the students become.

“She walked back to class wearing not only her new shoes, but a big smile on her face like she’d just won the lottery,” Linda said of one student who visited Kyler’s closet.

Kyler also regularly brings shoes to the Las Vegas Rescue Mission, where director of development Heather Williams gets to hand the shoes out to the homeless and those struggling during evening meals.

“Watching Kyler start his giveaways here about two years ago and seeing him grow into a determined young man who exudes a passion for helping others has been quite amazing,” Heather said.

“The one thing that most people don’t understand is this 14-year-old boy doesn’t even have his own bed to sleep in at night,” Kyler’s mother shared. “We’re in an emergency housing shelter… It makes it a lot more difficult for Kyler. He sleeps on a little love seat that his feet hang off of every night. [But] every morning, the first thing he thinks about is getting up and giving more to others. And to me, that’s just the most beautiful part of this…” she shared, holding back tears.

Kyler believes in kindness for others, and he likes to say that people can’t just “tell people to be kind, we have to show it, too.”

“It makes me feel amazing, and it’s helping to heal my PTSD,” Kyler said.

Kyler also enjoys knowing that he’s helping make sure that other children won’t be bullied for their shoes like he was.

“It makes me feel better that I give away shoes, because I have been through it,” he said. “It made me make sure that what happened to me wasn’t happening to anybody else.”

“Just to think that there’s 25,000 people walking around that didn’t have shoes, that have shoes now…” Sherise Nipper shared, “off of the most horrible day in our family’s life… it’s just so beautiful. It’s like a field of flowers has finally grown from the ashes.”

Kyler also loves helping the homeless. He recently was walking down the street and saw a homeless man walking barefoot. Kyler figured that he and the man had the same size feet, so he took off his own shoes and gave them to the homeless man. Kyler shared that they both walked away with a smile on their face.

“It’s the best feeling ever,” he said. “We’re spreading kindness and positivity along the way, so that to me is a success.”

Kind Family Buys 1,500 Pairs Of Shoes And Donates Them To Children In Need

After Seeing Homeless Man’s Shoes With Ends Cut Off So They’d Fit, Kind Man Gave Him His Own Pair

Do you think you had a better childhood without the cell phones, tablets and...

Johnny Depp Has Been Giving Millions To Children’s Hospitals Every Year, For More Than...