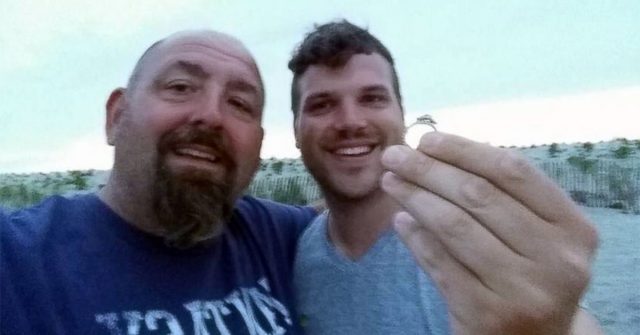 When a young couple asked for help after losing their wedding ring at the beach, a kind stranger drove down with his metal detector and found it for them.

Brandon Potter and his wife Debbie were at Tobay Beach on Long Island, New York, enjoying their weekend and having a day of rest and relaxation. Debbie asked her husband to hold her wedding ring while she put on some suntan lotion, and he ended up putting it in her short’s pocket. But as they were leaving, when they looked for her ring, it was gone.

“So yesterday Debbie Potter and I had a huge scare. She handed me her ring so she could put sun screen lotion on. I put it in her back pocket of her shorts and thought she heard me say I did,” Brandon shared in a post online.

“We went through our day at the beach and as we were leaving she asked me for her ring. I told her I put it in her shorts. It wasn’t there.”

The couple looked all over the beach for her ring, but it was nowhere to be found.

“We took turns looking on the beach and couldn’t find it,” Brandon said.

Debbie’s wedding ring is actually a wedding band and an anniversary band soldered together with a third ring in between, and was designed by Brandon’s father, a jeweler.

“My parents loved [Debbie] from day one, so [we] had this ring specially made for her,” said Brandon, who was quite sad that the ring was gone. “I felt like I failed my wife. It was my fault that the ring was lost,” he said.

Not sure what to do, Brandon used his phone to post in multiple Facebook groups related to Long Island, and he asked for help. One kind heart read about how they had lost their wedding ring, and told him that he would hop in his car and drive down to help them look.

“I took to Facebook groups as a Hail Mary,” Brandon said. “I posted on 10 different Long Island Facebook pages. There were so many people sharing our post, commenting and showing their compassion. A few people reached out to me with a metal detector. One guy, Mike Jandris commented that he was getting in his car and and would be there in 35 minutes. This blew my mind, this guy who has never met me or my wife is willing to help us find her ring, let alone drive out of his way to help.”

After about a half hour Mike showed up with his metal detector, and together they were able to find Debbie’s lost wedding ring.

“I met him down there and within 5 minutes of us looking at the spot, he found it. He truly is a hero to me and my wife. I told him to please add me on Facebook because only a true friend would drive out of their way to help someone find a ring! Thank you again Mike!”

After Mike had found the ring, Brandon gave him a heartfelt hug.

“When I found it he just started hugging me and high-fiving, you know, it was just really, really nice,” Mike said.

“Mike is a friend now… a friend for life,” Brandon said.

Kind Neighbors Offer Hot Tea And Coffee To Dozens Of Drivers Stuck In 7...

The 7 Reasons Why Everybody Loves Leos – Do You Know A Leo?