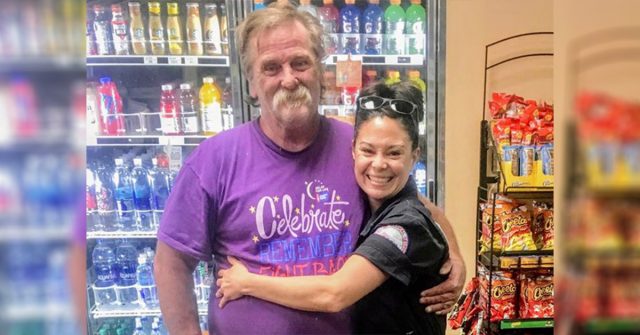 When Jeanah Nomelli saw a homeless man, Will, digging through a dumpster one day, she walked up to meet him. She was kind to Will, and over the course of several months, the two of them became friends. Each time her work as a paramedic had her posted in Will’s area, she would come to say hi to him; offering warm conversation, and also food and even new boots and a jacket during the winter.

One day Will stopped showing up at the gas station and Jeanah didn’t see him again. While she feared the worst had happened, 14 years later he showed up again; nicely dressed and well-groomed. After some “snot-crying together,” she asked for someone to take their picture and she shared the following:

“This is Will. 14 years ago, he was homeless and addicted to heroin. We met as he was digging in the dumpster looking for recyclables,” Jeanah explains.

“I asked him what possessed a man to do such a thing… he shared that his wife died unexpectedly and in the wake of her death, he tried heroin- ONE TIME and became addicted. He lost his home and job as a result of his addiction.”

“Over the next several months, Will and I developed a friendship. I looked forward to posting at hatch and Herndon in hopes I’d get to see him. I liked him more than my partner at the time so I enjoyed seeing him as often as I could. We helped each other through a few tough times by offering advice and life experience. Then one day he was gone! I never saw him again…. over the years I’ve wondered what happened to him. I wondered if he was even alive.”

Yet to Jeanah’s joyful surprise, she encountered a teary-eyed man at a different gas station, 14 years later.

“God allowed our paths to cross again… ironically in a different Chevron. He was waiting for me outside the bathroom. He stood there with tears in his eyes and asked if I remembered him.”

Jeanah recognized Will almost instantly, and he told her that he was the homeless man from before; reminding her that one time she had given him some money to get a new ID, and had also given him a warm pair of boots and a jacket on a cold night so that he didn’t freeze.

“It took me about two seconds, and I knew. It was my Will!! He nostalgically reminded me about a pair of boots and a jacket I gave him to make sure he didn’t freeze. I also gave him $7 to get his ID… with a promise that he wouldn’t spend it on drugs.”

Will told her what had happened, and she was both wonderfully surprised and overjoyed at how he had transformed his life.

“Will kept his promise. He got his ID, a job, and later a wife. Will also found grace in the arms of our heavenly creator. We totally snot cried in the middle of the store before asking the clerk to take our picture.”

“I wanted to share this story because kindness matters. Kindness can change the course of someone’s world. You may never know it, but Will is proof of that. Be Kind in all you do. One day it will find you and overwhelm you with eternal gratitude ❤️ ”

The story of Jeanah and Will has touched the hearts of thousands:

“Sobbing… you were the angel carrying the love and kindness he needed so he could believe in life again. May you both continue to be examples of kindness and hope and pass it on. Bless you both.” Susan K. shared.

“I want this for my daughter. She is an addict, but no matter what I Love her unconditional,” Rebecca G. shared.

“Snot cried. i’m snot crying. Beautiful ! Jeanah Nomelli is an angel in disguise. we just never know what that one special person does to impact the life of someone suffering.” said Jessica L.

“Thank you Jeanah for believing in humanity and seeing beyond the insanity. You are a warrior in my book! Will, thank you for standing strong, believing in yourself and not giving up. I love your courage! Wishing you both happiness, and strength forever ❤️❤️❤️❤️ ” said Alicia T.

Sometimes simply sharing a few kind words and some extra food with a homeless person who is all alone… can keep their heart warm for years. Jeanah was that kind person for Will, 14 years ago. Her kindness and regular conversation helped him to keep going, despite his dire situation.

The next time you encounter a homeless person digging through the trash, keep in mind the story of Will. Remember that sometimes lovable people have terribly difficult pasts, and remember that your kindness can provide the love and warmth they need to keep going and carrying on.

See Also: She Stole 5 Eggs To Feed Her Family, And Instead Of Arresting Her, He Brought Her 2 Truckloads Of Food

A post shared by Understanding Compassion (@understanding_compassion) on Nov 7, 2019 at 12:47pm PST