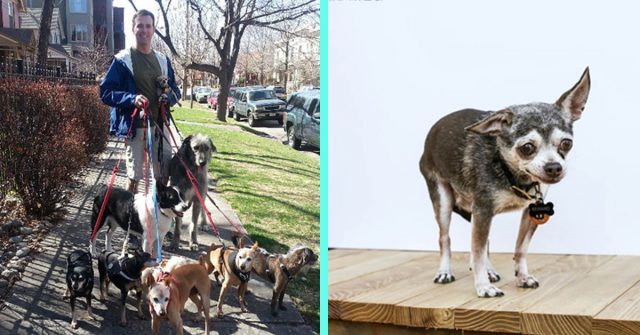 After Steve Greig lost his beloved pup and for a few months struggled with feelings of depression, he thought that the best way to honor his furry best friend’s memory was by adopting the “unadoptable” dogs he found at shelters.

Steve deeply loved his dog, Wolfgang, and when he passed, he had difficulty letting go.

“I was just so distraught…” Steve said. “A month or two went by and I still felt so horrible about it. I decided that the only way I would feel better was if something good happened that probably wouldn’t have happened if he had not [passed].”

Steve decided that he would go to his local animal shelter in Denver, Colorado, and adopt the “least adoptable” dog that they had. This way, he would be making something good come from the loss of Wolfgang, and he would be giving another dog the chance for a good life.

“So [I adopted] a 12-year-old Chihuahua [named Eeyore] with a heart murmur and four bad knees and I brought him home,” he said

“That was just the beginning of all the animals.”


After adopting Eeyore, Steve began searching out other dogs and pets at shelters which no one wanted to adopt, and he chose to give them a new, loving home.

“It was so immediately healing that I knew this is just what I was supposed to do,” he said. “From then on, I only adopted senior dogs. I heard about another one that needed a home and then another one, and I just kept expanding.”

“It’s just incredibly rewarding. These dogs get overlooked in shelters and they have so much light and love left in them.”

“I grew up with a lot of pets,” Steve said. “Both my parents were animal lovers and they pretty much always let me have whatever I wanted as long as I could take care of it.”

“Whenever I sit or lie down at a dog-friendly level, there are always at least three or four [dogs] attached.”

“[The older ones are] just wiser animals. You kind of know what you want out of life once you become a certain age. These older dogs know who they are, and it’s easy to develop a relationship with a person or pet who knows who they are. It’s just fulfilling knowing that these adorable animals are happy and loved and well-taken care of. It makes my days worthwhile.”