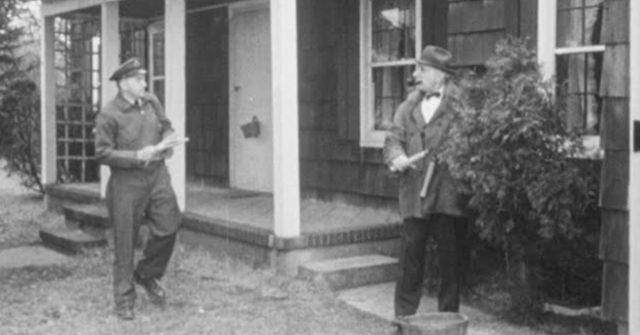 When Martin Klapper was 10-years-old, he witnessed a random act of kindness which inspired both him and his father to always be generous to others.

It was during the holidays in 1935, as millions of Americans were still struggling to make it through the great depression. Martin’s father was unable to pay his rent, and as a child he saw his father close to tears while sitting down outside. As the postman approached and talked with his father, Martin saw something that would open his heart and change his life forever.

“My parents, at the height of the Depression, were forced to go on home relief, which is known as welfare today,” Martin shared. “It was 1935, when I was 10 years old, and we lived on the first floor of a walk-up apartment on 43rd Street, in Brooklyn, New York.”

“A few days before Christmas, I looked out a kitchen window to see my father sitting on the stoop, dejected and depressed, with tears in his eyes. The mailman was approaching our building and asked my father what was wrong.”

Martin’s father had run out of his family’s food vouchers, and they were unable to pay their rent.

“I heard my father say that he had used up his food vouchers and that the rent was past due. He had tried to work as a laborer through the Works Progress Administration, but he wasn’t a very strong man, and the work had been too hard for him. I was scared, having seen newspaper pictures of people being put out on the street with all their belongings.”

Without hesitating, the kind postman gave $50 to Martin’s father, which in today’s dollars is worth around $900.

“’Ike, how much do you need?’ the mailman asked. My dad said he needed $33 for the rent, and without hesitation, the mailman took $50 from his wallet and handed it to my father.”

“My dad said, ‘I don’t know when I’ll be able to pay you back.’ The mailman put an arm around my father and said it would be okay if he paid him back or he didn’t pay him back.”

“The mailman noticed me looking through the window and said, ‘Isaac, things will not be this way forever. If you or your son will remember this day, there will be times in the future when someone needs your help. Help them within your means and tell them what happened this day. This will be my payback. Merry Christmas and Happy Chanukah.’”

“As long as he lived, my father helped others when he could, and I’ve done my best to do my part in paying his generosity back.”

One single yet deeply meaningful act of kindness for a struggling father and his child was enough to inspire both of them to be both kind and generous for the rest of their lives.

Never underestimate a moment of your kindness; it has the power to change lives in ways you may never know.

A post shared by Understanding Compassion (@understanding_compassion) on Nov 26, 2019 at 1:39am PST

Over 900 Cars Continued Paying It Forward After One Kind Person Paid For The...

33 YouTubers Came Together And Recorded This Heartwarming Lockdown Version Of ‘We Are The...