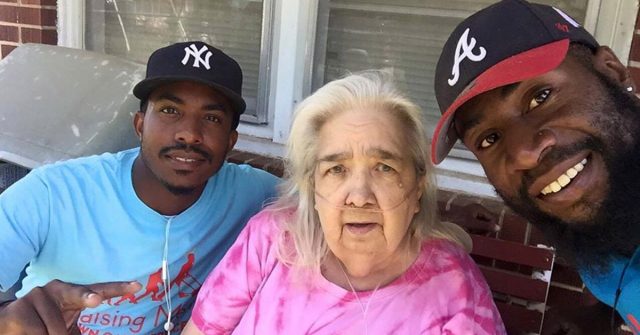 When an elderly woman had just been released from the hospital and was unable to afford having her lawn mowed, two kind men told her that she need not worry; that they would regularly mow her yard for free.

Rodney Smith Jr. and Terrence Stroy now come every two weeks to make sure that her lawn is taken care of; and more importantly, to let her know that she is loved.

“Today we did this lady’s yard. She was telling us how the man next door was charging her to cut her yard and she could not afford it because she is on a fixed income and just came out the hospital,” Rodney wrote.

“She also said how he harasses her for the payment. But she need not worry no more because Raising Men Lawn Care Service will be doing her lawn for FREE just like how we do the rest of the lawns and will get her lawn done every two weeks. She can use the money on things that she really needs like medication. We are making a difference!”

Rodney and Terrence run Raising Men Lawn Care, a nonprofit which seeks to show kindness and compassion to elders, those who are disabled, single mothers and veterans by mowing their lawns for free.

Rodney first began helping with lawn care when he noticed an elderly man really struggling while mowing his yard. He thought to himself, “I should do something about it.” He challenged himself to mow 40 yards for free in order to help the elderly and those who had trouble mowing their lawns. What began as this initial personal challenge turned into a program of more than 400 young men and women from around America who now also mow their neighbors lawns for free.

Rodney came up with The 50 Yard Challenge, which challenges children and teens all over the country to mow 50 lawns for people in need. They join by posting a photo online of themselves holding a sign which reads “I accept the 50 yard challenge,” and then they get to work.

“So let’s say you had a kid in New York that accepted the challenge, all they would need to do is make a sign saying, ‘I accept the 50 Yard Challenge,’ and in return, we send them a white Raising Men Lawn Care Service T-shirt, along with shades and ear protection. Once they mow 10 lawns, they get an orange shirt, 20 a green, 30 a blue, 40 a red and 50 a black. And once they reach 50, we fly to them, we do lawns with them and we also give them brand new lawnmowers,” Rodney explained.

Raising Men Lawn Care hopes not only to help those in need with their lawns, but to establish an inspiring program to keep our youth, both girls and boys, on a positive path while learning and understanding their value in society.

“I’m just trying to encourage kids to get out there and make a difference,” Rodney explained. “Too many kids are inside playing video games. And what I’m doing, I believe it’s my purpose. I remember a few years ago, I had a one-on-one conversation with God, and I asked him to use me as his vessel. He didn’t give me an answer that day, not a week later, not even a month later. It happened a few years later in 2015, when I came across an elderly man outside mowing his lawn, and it looked like he was struggling, so I pulled over and I helped him out. At the time I was getting my bachelor’s in computer science, so I thought I could mow 40 lawns by the end of winter. But I mowed 40 lawns so quick that I upped my goal to 100, and a month and a half later I reached my 100th lawn, and that’s when I came up with the idea of raising men lawn care service.”

Taking part in the 50 Yard Challenges helps young men and women understand the value of kindness and service for those in need.

“I let them know that they’re making a difference. I remember one kid we had, he came out for the first time with us in Huntsville, where I’m based out of, and at first he was like, ‘I don’t want to do this.’ But after he finished his first lawn, it was for an elderly man, and I asked him on camera, how does it feel to know that he made a difference. And his face lit up. He said, ‘Oh, did you see his face just now? I finished his lawn, and he had a big smile on his face and he thanked me. Oh man, oh man.’ I mean, it’s priceless just to see his face just light up after he’d done his first lawn, and that’s the kind of reaction a lot of the kids are giving us. So it’s really cool to see such a small idea grow into something that is inspiring kids nationwide and even worldwide,” Rodney said.

Rodney recently decided to visit all 50 states to mow lawns for those who needed some help.

“Before I started the tour, I made a request to my followers, if they knew anyone in the cities and states I’ll be going to. So I selected a city in each state where I’d be going to, and I put it out, and people just start submitting lawns of those who are elderly, disabled, single moms and veterans, and that’s how it all happened. I mow an average of three to four lawns per city. Sometimes it’s more.”

His tour has already left him with many treasured experiences and memories.

“I remember just a few days ago, this lady, she was a widow for a few years, and she just let the lawn go, because her husband used to take care of the lawn,” Rodney said. “But I came and mowed it for her, and it hadn’t been cut in probably three to four years.”

Watch the following video to see part of Rodney’s journey:

A post shared by Understanding Compassion (@understanding_compassion) on Oct 11, 2019 at 9:01am PDT

Loving Dad Books 6 Flights On Christmas To Spend Time With His Flight Attendant...