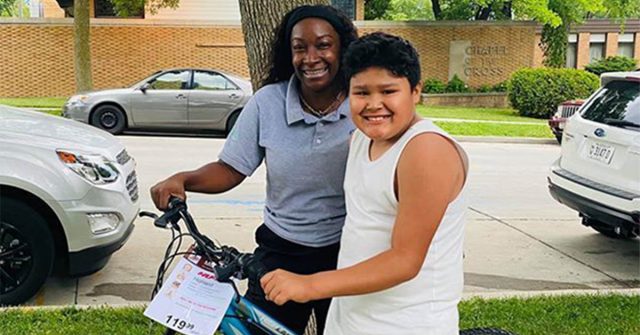 When Milwaukee County Transit System (MCTS) bus driver Shamika Anderson was on her regular route, her bus happened to break down on a hot 92 degree day. As she waited for another bus to arrive, she sat down on the sidewalk outside. That’s when 10-year-old DJ Fromme who lives in the neighborhood saw her.

“She was like down, like had her head down. She was disappointed, I could tell, so I decided to walk up to her, and said, ‘Hey how are you doing?'” DJ said.

DJ approached the distressed-looking Shamika and sat down beside her on the sidewalk.

“I take it she was having a bad day, so I wanted to cheer her up and make her heart feel warm,” he said.

The two had a pleasant conversation and opened up and talked about their lives. The 10-year-old learned how Shamika’s bus had broken down and she was waiting to be picked up, so he sweetly offered to let her ride his skateboard while she waited. She gave it a try as DJ held her hand to keep her steady.

“There was something about [Shamika] that I felt like I could trust her,” DJ said.

They had a good amount of time together, and Shamika learned a bit about the 10-year-old’s life situation. She learned that DJ likes to skateboard and ride his bike, but he had popped the tires. She also learned he was adopted and had never met his real parents, and that his guardian had recently been diagnosed with brain cancer. Yet despite the difficulties the boy had in his life, Shamika felt that the boy “didn’t seem to be sad about anything” and had a very sweet and positive attitude about him.

As the new bus rolled up, Shamika realized how fortunate she was to meet DJ and she appreciated how he went out of his way to be kind to her when she was having a tough day. She wrote down her number and asked DJ to give it to his family, and said that she wanted to ask them if she could drop off some goodies in return for his kindness sometime.

“I thought about it all day and I even told my kids, like sometimes we don’t be grateful for the things that we have and we have a lot. Here he is, just having a skateboard and he made the best of it,” Shamika shared.

Shamika later got permission from his guardians and stopped by his house to surprise him with a brand new bicycle.

“I was just intrigued by how humble he was, you know, with everything he was going through. He was still extremely positive. He didn’t seem sad about anything. He just made the best out of everything, so I decided to purchase him a bike,” Shamika said.

DJ was surprised and thrilled when Shamika showed up with a brand new bike to give him.

“My heart just started racing and I was like, I couldn’t speak at all,” DJ explained of when he received the bicycle.

DJ’s guardian, Peggy Olbrantz, was also surprised by the kindness of the bus driver.

“I was so stunned, it was the kindest, most generous thing I’ve ever heard of, I mean it was unbelievable,” she said.

DJ has been enjoying his bicycle and is staying in touch with Shamika as she has invited him to attend church on Sundays with her and her family.

Kind Firefighter Paid $1,000 Past Due Energy Bill For Stranger With Child On Home...