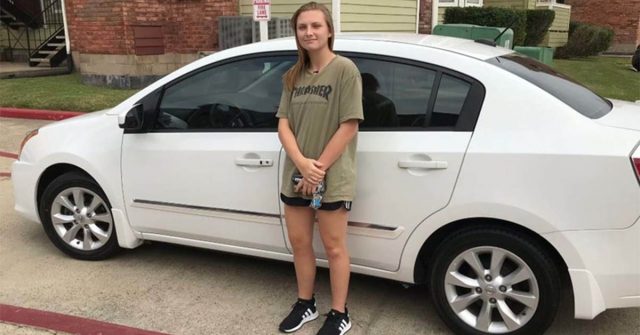 When a kind couple learned that their waitress was walking 14 miles roundtrip to work while trying to save for a car, they went out and bought her a car themselves.

Adrianna Edwards had been working as a waitress at a Denny’s in Galveston, Texas, in order to save enough money to buy a car, and after that, to send herself to college. In the meantime, Denny’s was seven miles from her home, and Adrianna had no choice but to walk the 14 mile roundtrip each day.

Adrianna woke up several hours before her shift each morning, and then began her roughly two and a half hour walk to work. Then after an entire shift of being on her feet all day, she would walk for another two and a half hours to return home.

In just three weeks on the job, she lost 25 pounds, but for Adrianna, giving up wasn’t an option, because she was working towards her dream of going to college.

While waiting on a couple one morning who was enjoying their breakfast, she had an enjoyable conversation with them. They learned that Adrianna was a little new and was saving to get herself a car and to eventually send herself to college, but was currently having to walk 14 miles each day to and from work. Adrianna ended up bringing the woman a little extra ice cream and wished them a lovely day as they finished their meal.

The couple, who has remained anonymous, left Denny’s that morning and stopped by Classic Galveston Auto Group. They found a used 2011 Nissan Sentra in good condition, and lovingly purchased the car for their waitress.

They returned to Denny’s a few hours after they had eaten and found Adrianna. They handed her a pair of car keys, but she didn’t quite understand and thought that maybe they were just joking.

“In my head, I was like ‘pranks are cool and everything… but this one is just a tad bit cruel,” Adrianna recalled thinking.

But as she went with them to the parking lot, tears of gratitude filled her eyes.

The couple gave her a note with the keys which read, “I know it’s Thanksgiving, but Merry Christmas,” and that, “Hopefully, someday she’ll just pay it forward.”

Now Adrianna has a car, and her previous four and a half hour trek to and from work is an enjoyable 30 minute joyride.

“This morning, the first thing I did when I woke up was look out my window to see if it’s actually there, or if I dreamed it,” she shared.

Adrianna will never forget the kindness of the couple, and hopes to pay it forward to someone else in need.

“When I see somebody in need, I’ll probably be more likely to help them out, to do everything that I can to help them out,” she said. “I just hope that one day when I’m financially stable enough, I can help somebody else in need.”

Watch this video of Adrianna with her new car: